A new thing to fear: getting tarantula hairs stuck in your eyes. 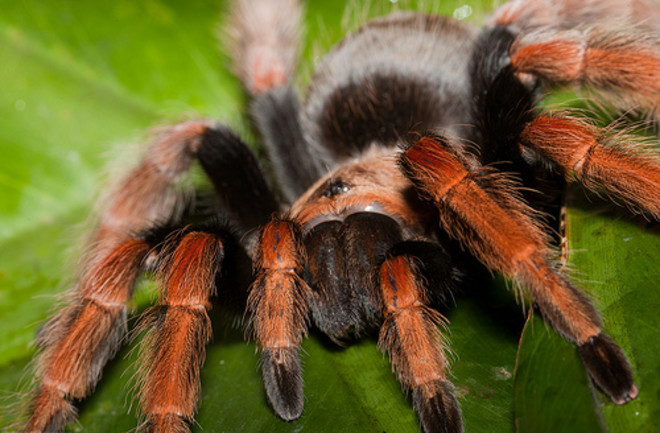 As if eye injuries weren’t creepy and weird enough, now we have to worry about tarantulas being involved. Apparently, these giant spiders have hairs that serve as defensive weapons that they can flick or press into your flesh (or your eyes) to cause long-term pain. Delightful!

“PURPOSE: To report a case of tarantula hairs found in the cornea and discuss treatment. CASE REPORT: A 16-year-old male presented with a 6-week history of right ocular irritation that began after letting his pet tarantula crawl on his face. Slit-lamp examination of the right eye revealed the presence of approximately 16 dark foreign bodies that had the appearance of small hairs. The foreign bodies were removed from the nasal region of the right cornea using Jewelers forceps, and the patient was prescribed a combination neomycin, polymyxin B, and dexamethasone ointment (Maxitrol(®)), given 4 times per day. RESULTS: The patient presented for follow-up 2 weeks later, with resolution of symptoms. CONCLUSION: Effective treatment of keratitis caused by tarantula hairs includes taking a detailed history, conducting a careful slit-lamp examination, removal of any accessible hairs, and initiation of treatment with a topical steroid as determined by the clinical picture.”

“Tarantulas are popular household pets that are widely available at pet stores. While many of these pet tarantulas are considered relatively safe due to their lack of poison or fangs, they pose an underappreciated danger from their defensive hairs. Tarantulas are recognized for their possession of true setae, which are a subtype of insect defensive hairs. The setae of these tarantulas are typically located on their abdomen, are short, ranging from 100 to 500 μm in length, have multiple barbs, and a density of 10,000–12,000 setae/mm. The base of the setae is attached to a stalk or socket on the spider, and the hairs are removed with mechanical stimulation. The tarantulas use these hairs defensively in 1 of 2 basic methods. Some species flick the setae at enemies with rapid vibrations of their hind legs, while others press the setae into an enemy upon contact.

Tarantula hairs have been reported to cause a number of medical issues in humans. It has been proposed that the hairs inflict injury initially through an acute inflammatory reaction followed by chronic granulomatous inflammation. Common presenting symptoms of ocular injury from tarantula hairs include conjunctival injection, foreign body sensation, periorbital facial rash, photophobia, and tearing. Because many of these symptoms are similar to other diagnoses, the presence of ocular injury secondary to tarantula hairs can be initially difficult to detect. Patients with tarantula hair foreign bodies can be misdiagnosed as having conjunctivitis. Slit-lamp examination reveals hairs that can be either light or dark in color, and their description varies, from ‘clear, acrylic rods’ to dark and ‘resembling needles’. The hairs are often easier to visualize after a short course of topical steroids because infiltrates clear.”