A New Species of Tiny Tyrannosaur Helps Explain the Rise of T. rex 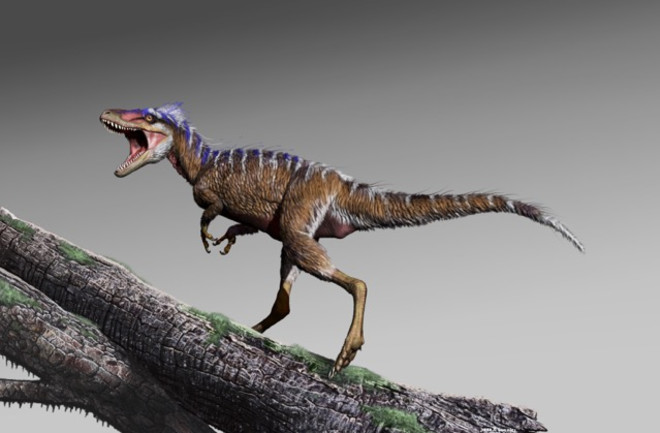 cientists have discovered a new species of tiny tyrannosaur that lived some 95 million years ago in what’s now Utah. The find helps fill a frustrating gap in the fossil record at a critical time when tyrannosaurs were evolving from small, speedy hunters, into the bone-crushing apex predators we know so well.

The new dinosaur has been dubbed Moros intrepidus, and its name means “harbinger of doom.” The creature, known only from a leg bone and some various teeth, weighed under 200 pounds as a fully-grown adult. It was a specialist predator and scientists say it was fast enough to easily run down prey while avoiding other meat-eaters.

Their discovery was published Thursday in the journal Nature Communications Biology.

Tyrannosaurus rex was one of the most terrifying creatures to ever live. Few larger predators have walked the Earth. But tyrannosaurs – a group including T. rex and dozens of relatives and ancestors – weren’t always so awe-inspiring.

Tyrannosaurs roamed the planet for more than 100 million years. And for much of that time, the two-legged predators were bit players in Earth’s ecosystems. The earliest of their kind stood shorter than a human. They were fleet-footed and relied on their brains and strong senses to hunt down prey.

Meanwhile, during that same time in the Jurassic period, another kind of dinosaur, the allosaurs, which look like T. rex to the untrained eye, grew as big as a school bus and hunted giant, long-necked sauropods. But a big change was coming. A period of intense volcanic eruptions rocked the end of the Jurassic 145 million years ago. The allosaurs and other large dinosaurs started dying out.

Then, over a relatively short period, tyrannosaurs in North America evolved into the beasts we now imagine. And by the time an asteroid killed off the non-avian dinosaurs 66 million years ago, a full-grown T. rex weighed in at some nine tons and spanned a whopping 40 feet from snout to tail. How that happened is one of the biggest unanswered questions for dinosaur experts like Lindsay Zanno, a paleontologist at North Carolina State University.

That’s why Zanno and her team have spent more than a decade systematically searching North America’s rocks for fossils from this era. As she puts it, she wants to know how tyrannosaurs went from “wall flowers to prom kings.”

In particular, they’ve been combing the deserts of Utah near a giant 1,000-foot-tall rock formation the team calls the Cliffs of Insanity. The name sprung from the realization that one day they’d have to climb them looking for fossils.

Scientists already have some ideas about what may have happened. But there’s scant fossil evidence to confirm or refute their theories. It may be that amid the mini-mass extinction, dinosaurs and other animals migrated across a land bridge from Asia into North America, like our own ancestors eventually would. The small, ancient tyrannosaurs might have simply been following their prey: relatives of triceratops, which were also much smaller at the time.

“We know that there’s this ecological transition happening in this time when a lot of dinosaurs living in North America disappear and go extinct, and a lot of other animals suddenly appear that have their closest relatives in Asia,” says Zanno. “They become established here in North America and then they go on to evolve into these iconic species that we know and love like Tyrannosaurus rex and Triceratops.”

One of the major hang-ups in deciphering what happened has been a 70-million-year gap in North American tyrannosaur fossils during the time when this evolution was taking place. The new tiny tyrannosaur, Moros, narrows that gap by 15 million years.

And the team’s analysis of the new animal and its relatives hints that tyrannosaurs evolved into giants in no more than 16 million years. Though it could have happened much faster.

Tyrannosaurs were opportunistic in their rise to power,” Zanno says. “Moros tells us that the T . rex lineage moved here from Asia and remained small until they were able to take over ecosystems.”

Still, this doesn’t answer the question of why exactly all this change took place. Zanno says finding that answer is part of a decade-long project still in the works.