A New, Prehistoric Fossil Sheds Light on How Birds Took to the Skies

The bird's fossil was found with its 3D structure intact — a rare find that helped paleontologists glean insights into the development of flight. 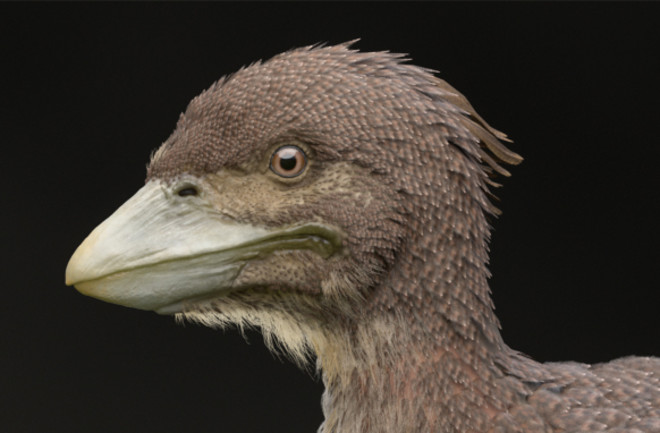 An artist’s reconstruction of what Fukuipteryx prima may have looked like. (Credit: Masanori Yoshida)

It was a typical Japanese summer — hot, humid and cloudy — when archaeologists pulled a well-preserved, fossilized bird from the ground in 2013. Their find, announced this week in Communications Biology, might change our idea of what adaptations were essential to the development of flight.

Named Fukuipteryx prima, the archaeologists date the bird to the Early Cretaceous, a period 145 million to 101 million years ago during which the evolution of flight was just taking off. This is the first species of early bird from the era found outside of China. And even though this specimen probably couldn’t fly very far, the fossil contains a bone that researchers previously thought only developed later, as birds were refining flight.

Future fossils from Japan and elsewhere might also help rework our understanding of how birds mastered the skies. “It may be a good opportunity for us to think back to what we thought we knew about bird evolution and start looking for new data in the regions where fossil birds are not very known, including Japan,” writes study coauthor Takuya Imai, a paleontologist with Fukui Prefectural University, via email.

All modern birds carry a distinct bone called a pygostyle, a triangle of fused spinal vertebrae right at the base of the tail. The structure supports tail feathers, and researchers thought it appeared in tandem with the development of flight in dinosaurs-turned-birds. Other birds from the same era as this find — all found in China — lack a pygostyle. But F. prima has one.

The find was unique in other ways, too. F. prima maintained its 3D form in the mud as it fossilized, something not usually seen. Imai says they’re not sure how — it may have fossilized quickly, and minerals filtered into the hollow bones and kept them from getting crushed under the weight of the soil. By having more of the bird’s original dimensions, the team could run a CT scan and construct its entire physique despite lacking some of the bones.

Based on their reconstruction, the team thinks this bird was on the brink of full-fledged flight. The armlike appendages are longer than the legs, indicating they were used like wings, but the dinosaur likely lacked the robust chest bones needed for true flight, Imai says. This bird likely glided or flapped short distances. And, of course, there’s the the aviation-friendly pygostyle, something paleontologists assumed this preflight specimen wouldn’t have.

The find means that this essential bone may have developed for other reasons in the bird lineage and only became helpful for flight later in evolution, Imai says. But more excavations outside of China are necessary to confirm this theory.

“If we keep doing that, our understanding about the Early Cretaceous evolution of birds on a global scale may completely change from what we currently think,” Imai says.