Morality is often considered to be the domain of philosophers, not biologists. But scientists have often wondered what role our genomes play in directing our moral compass. Today, a paper was published in the open access journal PLoS ONE which found moral decision making was influenced by different forms of a single gene. Picture yourself standing at branching train tracks with a unstoppable train barreling towards you. On one side, an evil villain has tied five people, while on the other, he has tied only one. You've got the switch in your hands which chooses which track the train goes down. Do you feel it's morally acceptable to choose to kill the one instead of the five? The scenario above is an example of foreseen harm. When such harm is unintentional, like in the train situation, most people are willing to go with Spock and say that the needs of the many outweigh the needs of the few. But previous research has found that people taking a particular group of antidepressants called selective serotonin reuptake inhibitors (SSRIs) were different - overall, they were less willing to say that killing the one person is morally justified, even if it's unavoidable. Serotonin is a chemical released at the junctions between nerves as a part of signaling in the brain. Since lower levels of serotonin are linked to sadness and depression, it is thought that by preventing the reuptake of serotonin, SSRIs fake higher overall serotonin levels and thus boost happy feelings. But the connection between SSRIs and morality got Abigail Marsh and her colleagues from Georgetown University and the National Institutes of Health thinking. They knew that natural variation in serotonin reuptake ability exists in the population because of alterations in the promoter for one of the serotonin transmitter genes. People with the long form of the promoter (L) have normal levels of reuptake, while those with a truncated version (S) have reduced serotonin reuptake, similar to taking an SSRI. The researchers wondered if this natural variation influenced moral decision making in the same way that treatment with an SSRI does. So, they took 65 healthy volunteers and tested their genes to see what versions of the promotor they had. Overall, 22 had two copies of the long form of the gene (LL), 30 had one of each (SL), and 13 had two copies of the short form of the gene (SS). They then asked these individuals to rate the overall morality of a variety of scenarios, including ones like the one above where one person is unintentionally harmed to save five others. The results were clear: although the three groups showed no differences when presented with morally neutral scenarios or those where harm is intentionally caused to an individual, there were significant differences between groups when it came to scenarios of foreseen harm. Those with the long form of the promoter were much more willing to approve of harming one person to protect five. They felt that doing so was the better moral choice: 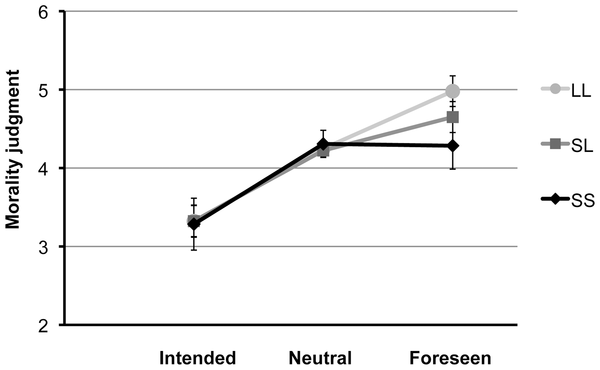 Those with the short form of the gene, however, felt that harming the one was morally neutral. “I think this study is useful in helping to point out that maybe the way people arrive at their moral intuitions is just different for different people, in ways that are very deeply rooted,” says Marsh, the lead author, in a press release. Indeed, moral decision making may be as deeply rooted as it can be - that is, in our genomes. Of course, as the quote from Steven Pinker at the beginning alluded, this kind of result leads to bigger questions. How has natural selection shaped what we think is right and wrong? How much of our moral code is influenced by our genes? And what does this say about the nature of morality itself?