A Man, a Plan, a Canal, a Broken Chromosome—Palindromes May Disrupt DNA Replication 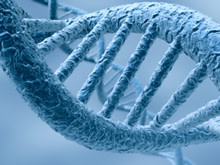 "Never odd or even."

Palindromes may be fun for linguaphiles, but these same-backward-as-forward phrases can be disastrous for your DNA, Tufts University researchers have found.

When DNA replication becomes slower or different than normal, it can lead to chromosomes breaking during cell division; broken chromosomes, in turn, have been connected to some kinds of cancer. Usually, our genetic material has safeguards to make sure the DNA base pairs are copied correctly—A goes with T, C goes with G—so the researchers wanted to know how replication gets off track.

They found that lengthy palindromes in the DNA letters—say, the genetic equivalent of "Are we not drawn onward, we few, drawn onward to new era?"—could alter the DNA's shape. Rather than a double helix, the DNA can become a hairpin or cruciform shape, according to research leader Sergei Mirkin. He says these peculiar shapes can stall DNA replication, causing chromosomes to break during cell division.

Who knew word games could be so dangerous?