A Gonzo Look at Endangered Animals 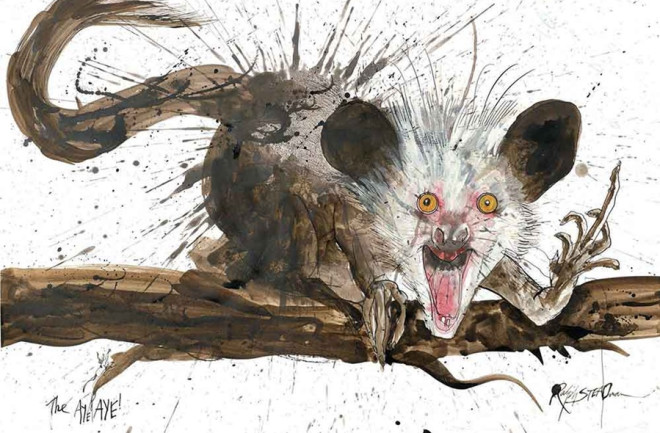 Thanks to humans, our planet is facing its sixth great extinction. As their habitats dwindle or are destroyed altogether, many plants and animals are disappearing. That’s not much fun to think about. So, with that in mind, writer Ceri Levy sought out legendary illustrator Ralph Steadman. Among his many accolades, the British artist co-invented gonzo journalism — where the storyteller becomes the story — as an illustrator for the various works of lifelong friend Hunter S. Thompson, including Fear and Loathing in Las Vegas.

Levy asked Steadman to draw one particular endangered bird for an art exhibition. He agreed. But Steadman couldn’t stop at just one; he’s now drawn hundreds of endangered species. The pair have published three books together, including their latest, Critical Critters, excerpted here.

Steadman starts the process by spilling dirty ink water on a page, and then uses a “Ralphschach test” with Levy to see which endangered species jumps off the page. By blending hallucinogenic illustrations with often humorous prose, Steadman and Levy seek to bring levity to an otherwise bleak subject. — Eric Betz, Discover Associate Editor

The orangutan is the only great ape in Asia. It was once widespread across the continent, but today its range has shrunk to the threatened rainforests of Sumatra and Borneo in Southeast Asia, where they are critically endangered.

Orangutans can live up to 50 years. Females don’t start to reproduce until between 10 and 12 years old, and they give birth every three to five years at most. Such a low birth rate makes it hard for the species to recover from sharp population declines. Much of their tropical rainforest homelands are being cleared to make way for oil palm plantations. The race is on to protect the 50 percent of orangutans that live outside of protected areas and find themselves living in the path of industry, machines and chain saws.

Przewalski’s Horse is almost unbelievably the last true wild species of horse left in the world. All other supposed “wild horses” are descended from escapees of domesticated herds. The P-Horse, as it is known in rarefied scientific circles, has never been domesticated. How’s that for a wild thing? How to pronounce it? Easy, it’s a Polish name and is apparently pronounced shuh-VAL-skee; the “Pr” is silent. Simple enough?

This horse’s downfall began when German merchant Carl Hagenbeck, who specialized in selling wild animals to zoos as well as to P.T. Barnum, captured pretty much all the wild populations of the horse. By 1945, just 31 P-Horses remained in two zoos in Munich and Prague.

Today, more than 1,500 individual P-Horses exist. Thanks to a reintroduction program, this horse is now found on the steppes of Central Asia, and up to 300 horses gambol around in Mongolia. China’s own captive breeding program has also successfully reintroduced a herd of horses into the wild. Small bands of horses in Russia and Hungary are doing well.

Przewalski’s Horse is now considered endangered, which is an incredible turnaround considering it had been deemed extinct in the wild up until 2008.

Melbourne Zoo is now researching the insect’s lifestyle, behavior, biology and diet. The ultimate goal is to reintroduce the stick insect to Lord Howe Island, but the rats must be eradicated first. Then, and only then, does this particular critter have a chance of returning home.

Coded message or not, there is a perfectly reasonable explanation for why the aye-aye has a middle finger that is so much longer, thinner and gnarlier than any of the others: It’s a percussive forager.

The aye-aye, a lemur from Madagascar, taps out a little rhythm on a wooden surface to determine where cavities are inside. Then, listening with its large disk-shaped ears and probably using echolocation, it decides exactly where the grubs are for grub time. It uses its incisors to make a small hole in the surface, and then it inserts its especially extended digit into said hole and presto — it pulls its dinner out of the opening, thus giving the invertebrates inside it the actual finger. And this finger is articulated by sitting on a ball-and-socket joint, allowing it to move and swivel a full 360 degrees. So watch out, the aye-aye can get ahold of you wherever you are.

Dexterity aside, hunting and superstition have left it endangered. This odd lemur is considered evil: Dead aye-ayes are often hung upside down outside a village to ward off evil spirits. Several ongoing captive breeding programs have not proved successful with second-generation creatures, and the work continues. Solutions need to be found — otherwise, we may have to say bye-bye to the aye-aye.

Why is this called Tarzan’s chameleon? Did Tarzan discover it? No, it is so named because it was discovered in Tarzan’s Forest just outside the village of Tarzanville (now renamed Ambodimeloka) in Madagascar in 2009. It was immediately categorized as critically endangered because slash-and-burn agriculture and illegal logging have fragmented its habitat.

In the 19th and early 20th centuries, the angelshark was common from Scandinavia to Africa and all points in between. But what a difference a hundred years or so can make. It has lost an estimated 80 percent of its population over three generations, and its range has shrunk to a small area around the Canary Islands. Because the angelshark lives on the bottom of the sea, it is more prone to being accidentally caught by fishing trawlers.

In 2016, the Angel Shark Project developed a plan to steer the next 10 years of conservation work to ensure the future of the angelshark and its relatives, collectively (if slightly confusingly) known as the angel sharks. The project’s vision is to safeguard the angelshark’s last stronghold in the Canaries, stabilize the population and eventually increase angelshark numbers.