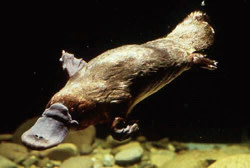 The platypus genome, which was published for the first time last week, has proved to be a Whitman's sampler of biological treats. In case you missed the initial reports, you can check out a good summary from PZ Myers (and also take a look at Ryan Gregory's take-down of the bad coverage). But today I just happened to come across another treat that, to my knowledge, hadn't yet been picked out from the box. It's a paper that came out today in Genome Biology. It concerns a very cool side of evolution that not many people appreciate. Species can evolve when their genes are modified, or when they acquire new ones. But the platypus turns out to be a great example of how species can evolve by losing genes. When scientists sequencing the platypus genome matched up genes from the platypus to the genes from other mammals, a bunch of genes were missing from the duck-billed creature's DNA. They were genes for protein-cutting enzymes called proteases. A closer looked revealed that these missing genes were for enzymes made only in the stomach. An even closer look revealed that these genes were not absent altogether, just disabled. Virus-like pieces of DNA had been inserted in the middle of these genes, making it impossible for the cells to make proteins from them. The scientists then looked at other genes for proteins that typically get made in the stomach. Some proteins, for example, create the acidic conditions in the stomach. The genes were broken in the platypus too. Here's what makes these losses really weird: Platypuses have lost their stomach. Just about all vertebrates have a stomach, a special, acid-drenched pouch with a number of specialized types of cells for producing digestive enzymes. The stomach of fish is build with the same developmental genes as ours. But for some reason, the platypus stomach has disappeared, leaving just as featureless tube connecting the esophagus to the intestines. Why platypuses would lose their stomachs while almost no other vertebrate has over the past 400 million years is a question I'd love to hear the answer to. (I didn't even know to ask the question till I read the paper today.) And now scientists have found that stomach genes have performed the same disappearing act. But their remnants leave a sloppy trail of evidence of how this gastric bypass evolved.