Recovered from an ancient settlement, this hardened chunk of tree bark carries the DNA of the person who chewed it — and evidence of her meals. 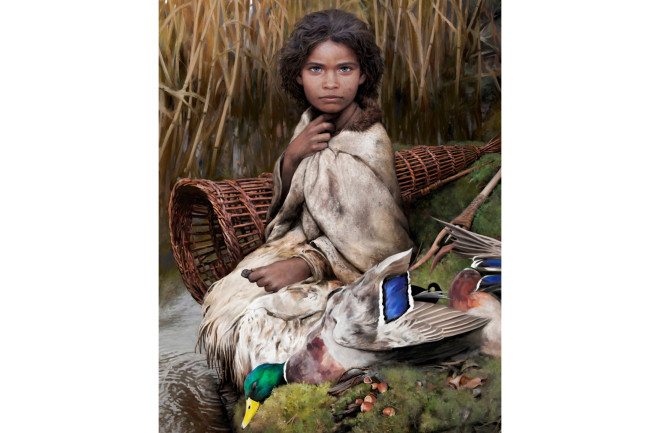 An artistic reconstruction of the ancient hunter-gatherer who chewed the pitch. (Credit: Tom Björklund)

Not unlike New Yorkers, some of our ancient relatives felt comfortable leaving their gum wherever they pleased. Now, archaeologists combing through centuries-old settlements are recovering these chewed remains, breaking them down and learning more about the people who spat them out.

One such wad, recovered in southern Denmark, was likely chomped about 5,700 years ago by a member of one of the last groups of hunter-gatherers in the region. A full genome recovered from the gum shows it belonged to a dark-skinned, dark-haired and blue-eyed female, according to an analysis published in Nature Communications. The recovered DNA also hints at what kind of foods and diseases were common among people of the region, as well as where they might have come from in the first place.

The “gum” in question is birch pitch, a byproduct of heating up tree bark. It’s unclear what our relatives chewed it for. It may have helped with toothaches or other illnesses, as it contains a natural antiseptic. Or people may have popped pitch into their mouths because that was the best way to make it stretchy enough with which to bind together stone tools. Either way, we’ve been chewing pitch for tens of thousands of years. It's not the first time researchers have retrieved genetic information from the samples, either. Earlier this year, scientists reported retrieving DNA from a piece of chewed pitch around 10,000 years old.

Other archaeologists have found that because the ancient gum repels water and destroys bacteria, it preserves DNA well enough for analysis. It was a particularly lucky find at this excavation of a former fishing site on the Danish island of Lolland. The British, Danish and Norwegian researchers haven’t found any human remains at the site.

The chewed birch pitch found at the site in Denmark and dated to 5,700 years old. (Credit: Theis Jensen)

Carbon dating showed the gum to be about 5,700 years old, meaning the chewer lived around when humans stopped hunting and gathering and started farming and domesticating animals. The human DNA pulled from the pitch highlighted her darker skin, darker hair and blue eyes, common among hunter-gatherers of that time and place. Comparing her genome to modern-day and other ancient DNA showed she was related to other hunter-gatherers from farther west in Europe.

Though she lived on the cusp of when humans developed agriculture, the recovered DNA showed no signs of those slightly more recent relatives. This might indicate that the hunter-gatherers stayed genetically independent of their farming relatives for a while and that agriculture took longer to catch on than researchers thought.

Other kinds of DNA came from the gum, too. Some of the bacterial genetic material recovered might be related to diseases we still deal with today, like pneumonia, gum infections and a strain of herpes. Hazelnut and mallard duck DNA showed up as well — likely evidence of a meal, backed up by other remains found at the site.

One woman’s gum can’t map how early humans migrated across Europe or pinpoint when they started planting grains. But it can offer insight into how one person lived, and lets us see how much we had in common with some of the last hunter-gatherers.