A First-Hand Look at the Grizzly Recovery

A weekend course sends visitors into the wild to see the bears up close. 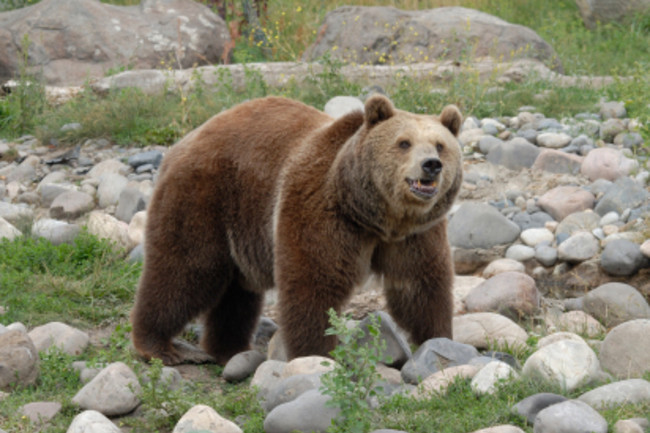 On the southern bank of the Lamar River in Yellowstone National Park, a female grizzly bear forages for tubers, snout to the ground. For a day and a half, she eats and dozes in the same spot, ignoring the huge herd of bison that graze nearby. Much like humans, grizzlies are clever scavengers, feasting on rodents, trout, roots, nuts, berries, insects, and dead animals. But they paid a price for their omnivory, at least at Yellowstone. During the course “Grizzlies: From Dumps to Recovery?” at the Yellowstone Association Institute last September, I spent a weekend tracking grizzlies and learning about their reversals of fortune in the park.

A dozen of us—including a student, an artist, a car salesman, a mining archaeologist, and some retirees—stayed in log cabins at the Buffalo Ranch in the Lamar Valley, an area often called North America’s Serengeti. Led by wildlife biologist Mark Haroldson—who once spent three months deep in Yellowstone observing bears and sleeping in trees—we started our days well before dawn, setting up spotting scopes at roadside pullouts to scan the meadows and ridges. In the afternoons we hiked to unoccupied bear dens and visited the sites of former garbage dumps that were attractions for both bears and tourists from the 1930s to the 1960s. Back then, visitors would gather on bleachers around these open pits (also known as “lunch counters”) to watch bears feed.

In the evenings, top Yellowstone grizzly scientists dished out details on the bears’ diet and reproduction and the population’s ups and downs. The bears’ favorite dumps were closed between 1968 and 1971; during that period the grizzly population in Yellowstone plummeted from 312 to 172 animals. Hungry bears started breaking into garbage cans, ambling onto ranches, and damaging property. Some bears were relocated; others were killed by private citizens as a nuisance or shot by hunters. In 1975 the U.S. Fish and Wildlife Service listed the grizzly as a threatened species.

Since then, the bears have thrived under government protection and management. The Yellowstone grizzly population, which has been increasing by 4 percent to 7 percent a year, now tops 570 and has spilled beyond the park into areas that were bear-free for decades. In 2007 the Yellowstone grizzlies were delisted. While opportunities for grizzly conflicts with humans are on the rise, we are still more of a threat to these magnificent animals than they are to us.

The Yellowstone Association offers year-round field courses on topics ranging from calderas and climate change to wolves and wildflowers. The next “Dumps to Recovery” course is planned for Spring 2009 (approximately $250; lodging at the park is an additional $25 per person per night for a shared cabin).