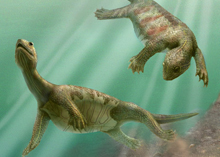 Three prehistoric turtle fossils dating from 220 million years ago have provided new evidence to fuel the debate over how the turtle's remarkable shell evolved. The fossils, which were found in southwestern China, show turtles with fully developed shells on their bellies, but nothing above on their backs. Says researcher Xiao-chun Wu:

"Since the 1800s, there have been many hypotheses about the origin of the turtle shell. Now we have these fossils of the earliest known turtle. They support the theory that the shell would have formed from below as extensions of the backbone and ribs, rather than as bony plates from the skin as others have theorised" [Telegraph].

Researchers write in their paper in Nature [subscription required] that they named the new speciesOdontochelys semistestacea, which means toothed, half-shelled turtle. Wu and his coauthor Chun Li say the fossils support the theory that the lower shell, called the plastron, evolved first, and that the upper shell, called the carapace, formed later.

This process corresponds with the shell formation seen in turtle embryos and hatchlings [Telegraph].

The new research contradicts the other main theory regarding the evolution of the turtle shell, which holds that the shell

evolved from bony plates on the skin that broadened and fused together to form the turtle's armor. The entire structure would then fuse to the underlying ribs and backbone. (Modern reptiles, such as crocodiles, have these bony plates, as did some dinosaurs, such as ankylosaurs.) The newly studied Odontochelys specimens, however, showed no signs of bony skin plates [LiveScience].

The fossils also suggest that the prehistoric turtle was a marine animal, researchers say, who probably lived in river deltas or shallow coastal waters. Zoologist Olivier Rieppel examined the fossils, and agrees with this conclusion.

"This strongly suggests Odontochelys was a water dweller whose swimming exposed its underside to predators. Reptiles living on the land have their bellies close to the ground with little exposure to danger," he said [BBC News].

Researchers say the structure and proportions of the reptile's long forelimbs also support the notion that it was a swimmer. However, not everyone is on board with the research team's theory that the half-shelled animal represents one of the earliest evolutionary stages of the turtle shell. Paleontologist Robert Reisz comments:

"Their argument is valid.... But we argue that it's equally possible that this could already be a [shell] reduction in an earlier turtle that we haven't found. Lots of marine turtles actually reduce their shell once they get into the water"[National Geographic News].

Researchers will have to keep digging for more turtle fossils, Reisz says, if they want to find the real missing link between reptile ancestors and the first turtles. Image: Marlene Donnelly