A circuit for aggression in the brains of angry birds 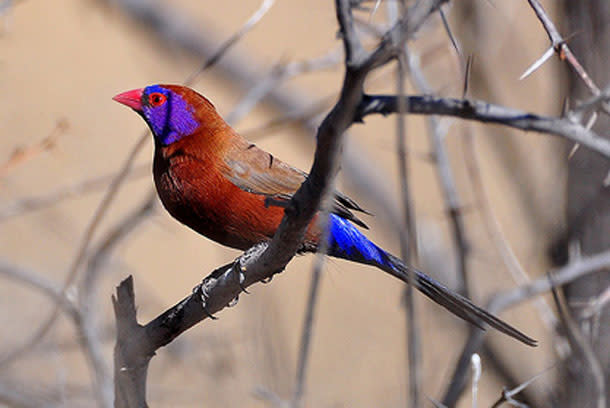 In his lab at Indiana University, James Goodson keeps violet-eared waxbills – a stunning but notoriously aggressive type of finch. Males and females form life-long bonds but they don’t play well with others. “Most of our animals are housed in male-female pairs, but were you to introduce another adult into their cage, most of them would attack immediately,” says Goodson. But some of Goodson’s birds don’t fit the stereotype. They almost never attack intruders. These birds weren’t born docile. They became that way after Goodson stopped a special group of neurons in their brains from releasing a chemical called VIP. This single act turned fighters into pacifists and confirmed, in dramatic fashion, that there’s a special class of cell that drives aggression in these bird brains. The neurons that Goodson targeted are found in the hypothalamus – a primitive ball-shaped region in the centre of the brain that governs many of our basic functions, from sleep to hunger to body temperature. It also has a long history with aggression. For decades, scientists have found that an electric burst to the hypothalamus can make mammals and birds more aggressive. And last year, Dayu Lin showed that he could transform docile mice into vicious brutes by switching on neurons in a specific part of the hypothalamus called the ventrolateral ventromedial hypothalamus (VMHvl). Goodson focused on an adjoining area called the anterior hypothalamus (AH), which has been linked to aggressive behaviour in back-boned animals from fish to humans. He found that neurons in the upper part of the HA are more active when male waxbills attack subordinate intruders. The more belligerent the bird, the more active these neurons were. This small part of the hypothalamus is rife with neurons that secrete a hormone called VIP. It’s a chemical jack-of-all-trades that affects the width of blood vessels, controls the movement of gut muscles, and more. It also affects the brain, but aside from some involvement in body clocks, we know very little about what it does there. Here’s one clue: every part of the brain that’s important for social behaviour has neurons that secrete, carry or respond to VIP. Goodson found another clue earlier this year: he showed that the amount of VIP in the AH predicted how aggressive different species of sparrow are. Now, he has managed to completely abolished any aggressive behaviour in his waxbills by stopping the neurons in their AH from producing VIP. He used a small piece of DNA that’s specifically matched to the birds’ VIP gene, and stops them from making the hormone. When he infused their AH with this fragment, their reactions to intruders changed from immediate fisticuffs to the equivalent of harsh language. The birds hadn’t been generally sedated by the treatment, because they kept on eating and moving as per usual. Their social skills hadn’t been dulled, because they were still willing to spend time with blue waxbills – a different species that they sometimes associate with in the wild. And they could still tell that an intruder had arrived, for they continued to make angry calls and threatening displays. They just didn’t fight, chase or attack. Goodson got the same results when he worked with zebra finches. Unlike the fierce waxbills, zebra finches are very sociable and live in large colonies. They only attack when competing for mates or defending their nests. But even these pacifists became even more peaceful after a VIP-reducing injection. These results are astonishing in how specific they are. Goodson has shown that a specific group of neurons – those in the upper AH that secrete VIP – drive aggressive behaviour in birds, and only aggressive behaviour. They don’t affect more pleasant social skills, the ability to recognise other individuals, anxiousness, or movement—just aggression. Even more specifically, Goodson thinks that these neurons affect aggression when birds defend their territories, but not when they compete for mates. After he injected the zebra finches with the anti-VIP fragment and placed them together with other finches, they took two days to become less aggressive. On the first day, when they were competing for mates, they’d fight as often as their untreated peers. On the second day, after they had paired up and set up a nest, suddenly they became more passive. Dayu Lin, whose work I described above, praises the paper. "Not many mammalian studies have implied a role of VIP in aggression, "she says. “The big question is whether that cell group exists in mammals and whether it has the same function.” This is important not just for understanding the relevance to humans, but because it would be easier to unpick what VIP actually does in mice, according to Clifford Saper, who studies the hypothalamus. “The genetic tricks that are available in mice cannot be done in birds,” he says. Saper also checked the Allen Brain Atlas – a massive database showing how genes are switched on across a mouse’s brain – and says, “It doesn’t appear that there is a similar VIP group in mouse brain.” But Goodson counters that the Atlas may be out of date.Many of the studies looking at VIP in mouse brains are old, and don’t focus on the hypothalamus. And because neurons make and release VIP very quickly, it’s quite hard to track the chemical. At the very least, we know that VIP is found in the AH of sheep and hedgehogs, and Goodson says, “This region of the brain is very similar across all vertebrate groups, and in both birds and mammals.” Reference: Goodson, Kelly, Kingsbury & Thompson. 2012. An aggression-specific cell type in the anterior hypothalamus of finches. PNAS http://dx.doi.org/10.1073/pnas.1207995109