A Better Catheter, Brought to You by the Beetle Penis 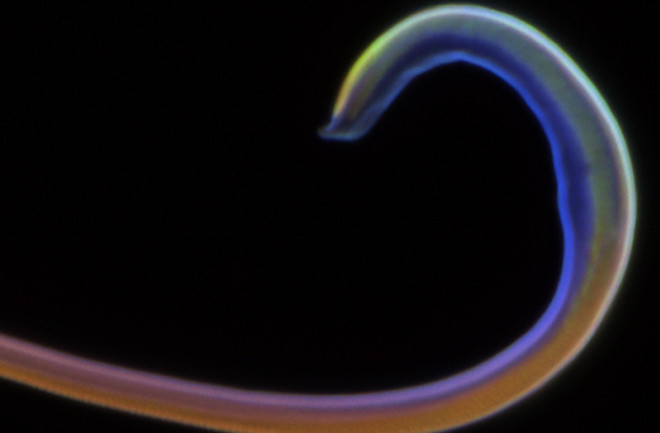 Confocal laser scanning microscope image of the Cassida rubiginosa flagellum tip. (Credit: Matsumura, Kovalev, Gorb, Sci. Adv. 2017;3: eaao5469) Male beetles often have thin penises longer than their bodies. Now scientists are discovering how these insects can have sex without breaking their narrow, lengthy penises, findings that could help lead to longer, stronger catheters for use in medicine. Scientists experimented with thistle tortoise beetles, Cassida rubiginosa. The insects are about 8 millimeters long, and the penises of the males are roughly 10 millimeters long but less than 0.01 millimeters wide, or about 10 times thinner than the average human hair. "I am interested in the evolutionary histories of insect genitalia because insect genitalia are very diverse," said study lead author Yoko Matsumura, a functional morphologist at Kiel University in Kiel, Germany. The male thistle tortoise beetle normally keeps its penis stored in the convoluted ejaculatory duct within its abdomen. When one wants to have sex, it mounts a female, and if the female is receptive, the male then begins copulation. To see how these insects can have sex with these seemingly fragile structures without them buckling or rupturing, the scientists removed penises from 10 male beetles and carefully bent them under a microscope to analyze their stiffness. "As far as we know, there are no studies that apply a bending test for such a small biological structure," Matsumura said. "So we had to design our experimental setup and create tools to carry out the experiment completely by ourselves." She considered it "a miracle to have succeeded in the experiment." The researchers discovered the beetle penis had numerous elaborate mechanical adaptations that likely aided its performance. For example, it had a soft tip and a stiff base, a combination that gave it enhanced flexibility and durability. In addition, they found the tip had a soft inner curve likely made of the rubber-like protein resilin and a harder outer curve, which may work together to make it tougher during penetration. Moreover, they suggested the shape of the penis, which is cylindrical with a curled tip, may help it fit better inside a female. "The animals can achieve the penetration of a delicate and elongated structure into a very complicated duct with very rare breakage," Matsumura said. "We hope that our finding will help improve medical tools — for example, medical catheters." Matsumara noted that many insects have elongated penises. The researchers hope to analyze the properties of such penises in the future to see if they perform in a similar manner.