A Beautiful Web of Poison Extends A New Strand 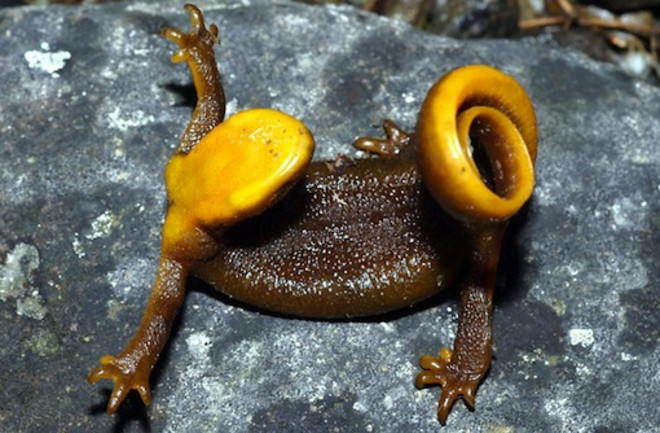 I just got back yesterday from the annual meeting of the Society for the Study of Evolution. It took place in a big hotel on the outskirts of Norman, Oklahoma, during a windy heat wave that felt like the Hair Dryer of the Gods. It had been a few years since I had last been to an SSE meeting, and I was struck by how genomic everything has gotten. No matter how obscure the species scientists are studying, they seem to have outrageous heaps of DNA sequence to analyze. A few years ago, they would have been content with a few scraps. Fortunately, SSE hasn't turned its back on good old natural history. There were lots of fascinating discoveries on offer, about species that I had assumed had been studied to death. My favorite was a talk about the rough-skinned newt, the most ridiculously poisonous animal in America.

The scientific tale of the rough-skinned newt begins five decades ago, with a story about three dead hunters in Oregon. Reportedly, the bodies of the hunters were discovered around a camp fire. They showed no signs of injury, and nothing had been stolen. The only strange thing about the scene was the coffee pot. Curled up inside was a newt.

In the 1960s, a biologist named Butch Brodie got curious about the story. The newt in the coffee pot--known as the rough-skinned newt--has a dull brown back, but when it is disturbed, it bends its head backward like a contortionist to reveal an orange belly as bright as candy corn. Bright colors are common among poisonous animals. It's a signal that says, in effect, "If you know what's good for you, you'll leave me alone." Brodie wondered if the newts were toxic, too.

Toxic, it turns out, doesn't do the newts justice. They are little death machines. The newts produce a chemical in their skin called tetrodotoxin, or TTX for short, that's made by other poisonous animals like pufferfish. Locking onto sodium channels on the surface of neurons, TTX blocks signals in the nervous system, leading to a quick death. In fact, TTX is 10,000 times deadlier than cyanide. While we may never know for sure what killed those three Oregon hunters, we do know that a single rough-skinned newt could have easily produced enough TTX to kill them, and have plenty of poison left over to kill dozens more.

Now, if the whole idea of evolution makes you uneasy, you might react by saying, "That couldn't possibly have evolved." Experience has shown that this is not a wise thing to say. Brodie said something different: the most plausible explanation for a ridiculously poisonous animal is that it is locked in a coevolutionary arms race with a ridiculously well-defended predator. Another biologist mentioned to him that he'd seen garter snakes dining on rough-skinned newts, and so Brodie investigated. He discovered that garter snakes in rough-skinned newt territory have evolved peculiar shape to the receptors on their neurons that TTX would normally grab.

The coevolution of newts and snakes became a family business. Brodie's son, Edmund, grew up catching newts, and today he's a biologist at the University of Virginia. Father and son and colleagues have discovered that snakes have independently evolved the same mutations to their receptors in some populations, while evolving other mutations with the same effect in other populations. They've also found that both newts and snakes pay a cost for their weaponry. The newts put in a lot of energy into making TTX that could be directed to growing and making baby newts. The evolved receptors in garter snakes don't just protect them from TTX; they also leave the snakes slower than vulnerable snakes. They've studied newts and snakes up and down the west coast of North America and found a huge range of TTX potency and resistance. That's what you'd expect from a coevolutionary process in which local populations are adapting to each other in different environments, with different costs and benefits to escalating the fight.

This story is so irresistible that I've written about it twice: first, ten years ago in Evolution: The Triumph of an Idea,, and then in updated form last year in The Tangled Bank. I figured that the Brodies et al had pretty much discovered all there was to know about these creatures. But in Oklahoma, I discovered that they had missed what is arguably the coolest part of the whole story.

Think about it: you're a female newt, you've fended off attackers with a staggering amounts of poison in your skin, and now you want to pass on your genes to your descendants. You lay a heap of eggs in a pond, and what happens? A bunch of pond creatures come rushing in and have a feast of amphibian caviar.

What could you possibly do to ensure at least some of your offspring survived? Well, you have an awful lot of TTX in your system. You have enough of the stuff to give your eggs a parting gift to help them out there in the cruel, predator-infested world. Make your eggs poisonous.

That is exactly what female newts do. In fact, they load their eggs with TTX. To figure out if this poison provided a defense against predators, the Brodies and their students traveled to a group of ponds in central Oregon that are home to thousands of rough-skinned newts apiece. They collected dragonflies and other aquatic predators from the ponds and put them in buckets filled with newt eggs, along with muck from the pond bottoms. The scientists found that almost none of the predators would touch the newt eggs. Since these predators eat plenty of eggs of other species, this result shows that TTX does indeed help the newt eggs survive.

But there was one exception. Caddisfly larvae turned out to relish the newt eggs. In fact, the caddisflies actually grew bigger if they were supplied with newt eggs and pond muck than with pond muck alone. And yet the Brodies and their students estimate that there's enough TTX in one newt egg to kill somewhere between 500 and 3700 caddisflies.

You know where this is going. At the evolution meeting, one of their students, Brian Gall, described feeding newt skin to caddisflies both from the central Oregon ponds and from ponds elsewhere without newts. The newt-free caddisflies would happily munch on newt skin from which all the TTX was removed. But if there was more than a trace TTX in the skin, they refused to eat. The caddisflies that fed on newt eggs, on the other hand, would eat the most toxic skin Gall could provide.

It's not clear whether the caddisflies and the newts are truly co-evolving, however. The Brodies will have to find out whether adding extra TTX to eggs increases their survival in the presence of caddisflies. Another intriguing possibility arises from their discovery that the caddisflies actually harbor some of the TTX they eat in their tissues for weeks after eating the eggs. Perhaps the caddisflies are stealing the poison to protect themselves, as happens in monarch butterflies eating toxic milkweed.

In other words, this wonderfully deadly story isn't over yet.

[For more information, see this new paper in Can. J. Zool., and Understanding Evolution, an educational web site. Ed Brodie tells much of the story pre-caddisfly in a chapter of the new book, In The Light of Evolution (full disclosure: I wrote a chapter in it, too, which you can read as a pdf here)]