A Beautiful Look at a Hostile Planet 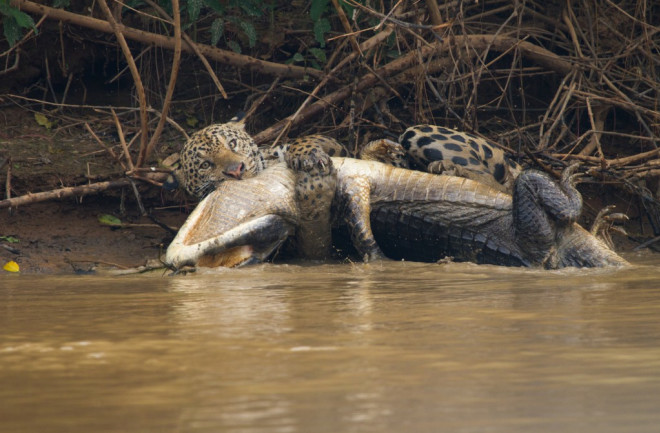 A jaguar with its fresh kill on a river bank in Brazil's Pantanal. Jaguars hunt crocs? Who knew? (Credit: National Geographic/Adrian Seymour)

One of the great challenges in searching for life on other planets is that we still have so much to learn about life on our own Earth. Amazingly, that is true not only at the micro level of biochemistry and genetic codes, but at the macro level as well. You would think that there would be little left to learn about elephants, bears, penguins and jaguars — the creatures sometimes lumped together by jaded zoologists as "charismatic megafauna" — but you would be wrong.

The new series "Hostile Planet" (its second episode premieres tonight at 8PM EDT on National Geographic) offers abundant evidence in that regard. At first glance, it looks like something you have seen before, another documentary show about nature, red in tooth and claw. It does indeed showcase quite a few megafauna of the charismatic variety. But the settings, the visuals and above all the behaviors caught on camera are a revelation.

Giving an additional twist to the formula, the host of the show is Bear Grylls, an adventurer and survivalist best known for shows like Man vs Nature and Survivor Games. Here he flips the roles, presenting the animals as the precarious survivors — or not, as is often the case. Some clips from the show have already begun making the rounds on the internet, like a startling showdown between a jaguar and a crocodile (seen above) or a heart-skipping sequence in which a snow leopard takes a 200-foot tumble off a frozen cliff while pursuing a Himalayan blue sheep.

Each of the six episodes explores a different ecosystem: the poles, mountains, jungles, oceans, grasslands and desert. I could do without some of the amped-up musical score, which sometimes makes it sound like it was originally intended for a Hunger Games movie, but there is no arguing with what you is on screen. Seeing familiar creatures doing unfamiliar things, and seeing it happen with an utterly improbable intimacy, drives home the wonderful, fascinating strangeness of life on this planet.

I caught up with Bear Grylls to find out how he took the leap into David Attenborough territory, and how the production team behind Hostile Planet managed to get footage that captures some the most intimate and agonized moments in the animals' lives. A lightly edited transcript of our conversation follows.

Q: What drew you to a show like this, which is rather a departure from the survival-themed shows you've mostly done in the past?

A: It’s a natural evolution for me — a project close to my heart having spent so many years housed in these kinds of places. I grew up as a big fan of the shows Blue Planet and Planet Earth fan, and I wanted to take it to a the next level. When I heard about ex-BBC people putting this project together, it seemed like a really natural fit. They came to me, I met with them, and it’s been a great pairing.

I’m used to productions where it’s just me and a couple people, and the process is super-fast. This series took 1,300 days! It's been a whole new experience, but it’s been amazing. We had an incredible team, totally dedicated. It took so long to film, but it’s something I’m really proud of. It’s never been done on this scale before. And the show definitely brings a lot of emotion with it. When you see what these animals are going through and how they survive and the pressures they’re under, it’s really inspiring.

Q: You mentioned having watched a lot of other nature shows. What sets this one apart?

A: A lot of this stuff has never been filmed before. The team captured sequences that have been out of the realm of the possible until now. You only have to look at the snow leopard sequence in the Himalayas, catching those high-mountain sheep. To see chases like that: the snow leopard falling off a hundred-foot cliff with its prey, still holding onto it. Three days later, the same snow leopard was spotting hunting again. Things like that. Or the jaguar catching the crocodile (caiman) in the Pantanal. That sort of thing just doesn’t happen, catching crocs in the water! It’s just mind-blowing stuff.

Some of the difference is just about being clever. There are some amazing sequences of these gazelle fawns when they’re first born, how they are hunted by cheetahs. It’s all filmed from the point of view of the prey rather than from the predator. They’re so weak and so vulnerable, they survive by feigning dead. It’s just brilliant, and gets you rooting for the animals.

Green turtles are part of the cast of Hostile Planet. Here, cameraman Roger Munns demonstrates the heroic and dangerous work needed to see life as it really is. (Credit: National Geographic/Jason Isley)

Q: Some of the sequences in the show are unlike anything I've seen before. Did you need new technology to get them?

A: A lot of it is done with remote cameras and drones. But ultimately, it’s the human factor, the dedication from the team on the ground. To spend that amount of time that amount of resources … nobody today spends 1,300 days filming a series! We film an episode in one or two days. It is a crazy amount of time, but that’s what makes Hostile Planet such a landmark. You don’t get many series on any network that have that amount of time going into them, and that’s why the end result is so special.

Q: What struck you the most this time, focusing on animals rather than people as the survivors?

A: I’ve seen so much close up in my travels, what I’ve learned is that the wild is incredible but also hard and unforgiving at times. Humans are making it even harder. What we’ve done is show how climate change has made the edge that a lot of these animals live on even sharper, even more unforgiving. And yet despite that, despite the even greater extremes in temperatures and flooding and storms and seas, they still manage to cling on to the edge of existence.

Q: What do you consider to be the core emotional message of the show?

A: Resilience of animals, and family and community. The way they work together, and the way that the skill of a survivor is as much about resourcefulness as about doggedness. You have to think laterally and work together. You have polar bears hunting for whales! Who’d ever heard of that? Because there’s thinner ice now [from global warming] and they can’t rely on their traditional food. They had to improvise. That’s what survivors do, and that’s been amazing to see.

Q: Have your own attitudes toward nature changed over time?

A: The more you immerse yourself in it, the more you see. The more I’m aware how fragile the planet is, the greater that respect has become. I started off doing a show called Man vs Wild, and I’ve almost come around almost to feeling like it’s Man Under Wild. The wild is incredible and all-powerful, but fragile. We [the TV crew] survive it, but the real survivors are these animals who live in it continuously. Seeing their journey is what’s been so moving.

Q: What do you consider the standout sequences in Hostile Planet?

A: Watching baby geese base jumping off the cliffs is pretty amazing. Most of them die, but some of them manage to survive and claw their way along the river, and on to life. Those sort of things have never been filmed before, or of they’d been filmed the animals have never been followed. I think that’s what’s different here. We’ve seen amazing natural history stuff before, but they’ve been standalone scenes, they haven’t been a journey. This really follows the journey: Why are they leaping off this cliff? Why are they crossing that, or why are they hunting like this? Then we follow the story. We haven’t known about these things before.

Q: Knowing all the struggles that go on in the wild, do you still find it relaxing to be in nature?

A: I don’t find it meditative at all. You have to be on your game, you have to be alert. You’re joining the pecking order. There’s always that sense of awe, for sure, but it’s more like: You’re surviving in these places. For Hostile Planet we went to the far corners of the Earth, and the edges are unforgiving places. We went to some of the hottest deserts in the world, and some of the coldest winter Arctic regions in the world. All of us, crew and everyone, you have to be on your game in those places. It definitely gives you an appreciation of what it’s like for the animals. For them it’s home. For us, we survive, but we’re just visiting.

Q: Do you ever imagine what life could be like on other worlds — in places that are even more extreme?

A: It’s so exciting, the potential, isn’t it? The more we learn, the more we realize what we don’t know, and the more there is to discover. Look at that thing we discovered, a planet that is potentially made of diamond. I’d never even thought of a whole planet made of diamond, how cool would that be! There’s limitless potential. Our job is to stay curious and to keep exploring.