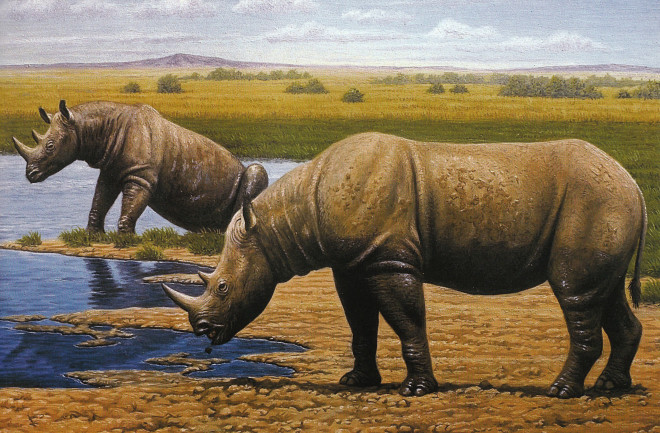 A really old rhino tooth has opened a new path toward understanding the tree of life — including, potentially, our own branch.

In September, researchers detailed in Nature how, using the tooth of a 1.77-million-year-old rhino from the Republic of Georgia, they were able to revise its family tree. The team’s success has implications far beyond rhino ancestry: It’s proof of concept that it’s possible to map out evolutionary relationships between species, with confidence and on a molecular level, without DNA.

Instead, the team extracted and sequenced proteins preserved in the rhino’s tooth enamel.

“Protein sequences are the best proxy [for DNA],” says University of Copenhagen’s Enrico Cappellini, lead author of the study. Cappellini is a specialist in paleoproteomics, the study of ancient proteins preserved in fossils. “In a way, you can read [proteins] like a text. If you retrieve only a few words, you can’t read the story. If you retrieve more words, you start to understand. And if you have the ancient and the modern text side by side, you can see the differences between them.”

Stephanorhinus called southwestern Asia home nearly 2 million years ago. The skull of one of the ancient rhinos included a tooth with preserved enamel proteins that researchers could read like DNA. (Credit: Mirian Kiladze, Georgian National Museum)

Each protein is a unique chain of amino acids arranged in a specific order. Like DNA, over time these complex chains accumulate small changes that can provide clues to the evolution of a species. Unlike fragile DNA, ancient proteins can last for millions of years in fossilized tissues, including bones and teeth.

For years, researchers have been able to extract and broadly identify these ancient proteins. More recently, however, they have been able to read the protein sequences on a much finer scale, finding subtle differences on an amino acid level. It’s similar to the way geneticists work with DNA, only instead of genomes, they’re reconstructing ancient proteomes.

Previous paleoproteomic work focused on the protein collagen, extracted from ancient bones rather than tooth enamel. Collagen, however, doesn’t change much between species, and it’s only a single protein. The tooth enamel proteome provides information on multiple proteins, and, as Cappellini puts it, “better chances to find a text we can read.”

And although the approach is destructive — tiny chips of enamel are pulverized and fed into a mass spectrometer — teeth are among the most common finds in the fossil record.

Paleoproteomics does have limitations. For example, proteomes are much smaller than genomes, so they provide fewer data points, and the extraction and sequencing of ancient proteins is difficult work. Still, the rhino tooth study shows that it’s possible to study organisms on a molecular level well beyond ancient DNA’s expiration date — theoretically including early members of our own family tree.

“I’m always fascinated to see something invisible become visible,” says John Hawks, a paleoanthropologist at the University of Wisconsin-Madison.

While he stressed that he admires the careful, thoughtful work of Cappellini and his colleagues, Hawks cautions that their success may have unintended consequences.

“The reality is that there is a bone rush,” Hawks says. “Copycats will come around to [museum collection curators] and say, ‘I’ll give you a paper in Nature … just give me some teeth to grind up.’ ”

For now, Cappellini is focused on refining the method to obtain more detailed proteomes, from potentially even older fossils.

“We don’t know how far back we can go,” says Cappellini. “I’m looking forward to finding out.”