#98: You're More Like a Sponge Than a Comb Jelly

A gelatinous zooplankton can now trace its roots back to the world's first life. 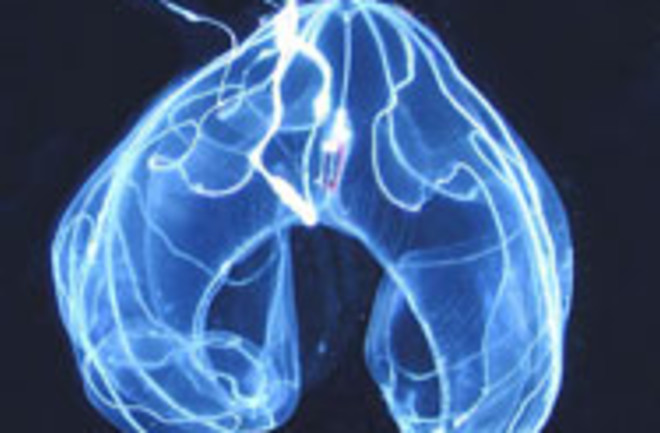 For years, evolutionary biologists have believed that the sedentary sponge—that mushy aquatic creature so rudimentary it doesn’t even have tissues or nerves—branched off the animal family tree before any other lineage, making it a relic of the very first animal on earth. But a new analysis of animal DNA, published in April in Nature [subscription required], bestows that honor on the common gelatinous zooplankton known as the comb jelly.

Earlier studies looked at many genes from a few animals or a few genes from many animals, but Brown University biologist Casey Dunn and his team cast a wider net, sampling DNA from all across the genomes of 71 different animals. The genetic signature of the comb jelly stood out as the most unlike any other animal, prompting the loss of status for the humble sponge.

Compared to a sponge, a comb jelly, with its nervous system and connective tissues, looks downright sophisticated. So how could the more complex animal predate the simpler one? One possibility, Dunn says, is that the jellies evolved their complexity separately from all other animals. Another idea is that perhaps sponges used to be more complex but lost some features along the way—a marked departure from the traditional view of evolution as defined by increasingly complex development.

More study will be needed to confirm the finding, but new data on comb jellies do not always come easy. Some of the creatures included in the study make their watery home two miles beneath the ocean’s surface and don’t survive very long after a submarine fishes them out. “You have only a few minutes to look at them before they just disappear and turn into ghostlike goo,” Dunn says.