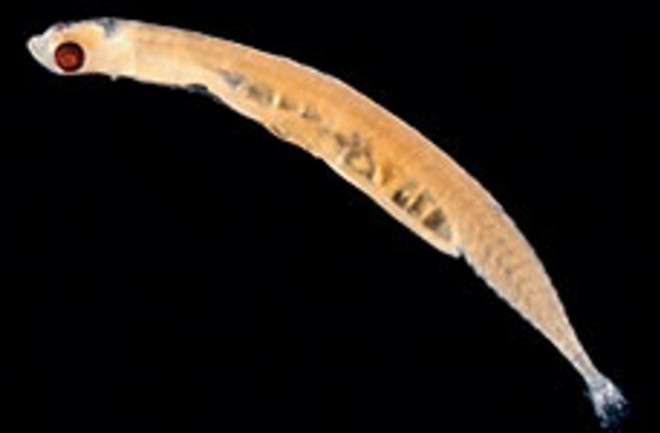 The female stout infantfish is the largest example of the world’s tiniest vertebrate—but not by much. About as long as the average pencil is wide (0.33 inch), the female is only 1/18th of an inch longer than the male. | Courtesy of Carl Bento/Australian Museum

After a delay of 25 years, scientists announced they had found the world’s smallest fish—toothless, scaleless, colorless (except for its black eyes), and so light that it takes 500,000 of them to weigh a pound.

Named the stout infantfish, the largest, a female, measured only about a third of an inch long. Males averaged about a quarter of an inch. Like two previously discovered species of infantfish, this species is paedomorphic: resembling an immature larval fish even when fully grown and sexually mature. Their life span is thought to be about two months.

Stout infantfish were captured in a plankton net on the Great Barrier Reef in Australia by a field researcher in 1979, then overlooked for more than two decades until H. J. Walker, a senior museum scientist at the Scripps Institution of Oceanography, and William Watson of the National Marine Fisheries Service, realized they were an unknown species. “It certainly expands the known size range of vertebrates and demonstrates we’re far from knowing the full diversity of vertebrate life,” he says.

Not much is known about how the diminutive fish fit into ocean ecology, but Walker says they live among plankton and feed on smaller organisms.