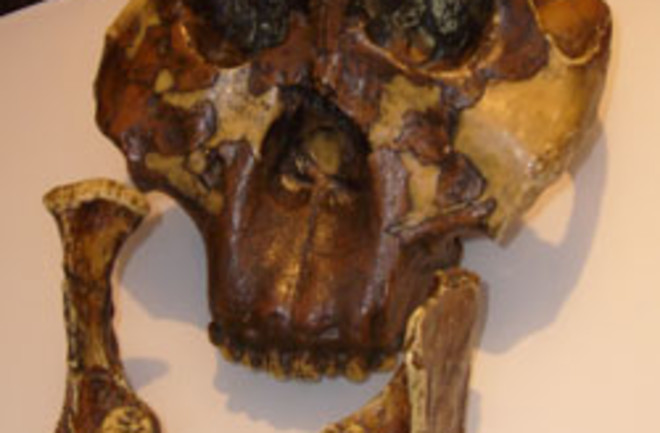 The human relative Paranthropus boisei grazed like a zebra. | Durova via Wikipedia

In 1959 paleontologist Mary Leakey pulled a bone fragment from a gully in Tanzania. The find turned out to be one small piece of Paranthropus boisei, an evolutionary cousin who went extinct some 1.5 million years ago. His strong jaw, flat molars, and bony spine on top of the skull led paleontologists to believe he ate nuts and seeds, earning him the nickname Nutcracker Man.

But last May, University of Utah geochemist Thure Cerling revealed that P. boisei had unexpected dining habits. Analyzing carbon isotopes from the tooth enamel of 22 P. boisei individuals, Cerling found traces not of nuts but mostly grasses and grasslike plants. About 80 percent of their food came from the fields, where they grazed alongside gazelles, horses, and elephants.

That diet is markedly different from those of other primates. Chimps and gorillas find their food in forests. Direct human ancestors ate plants and meat. “It’s long been thought that primate digestive physiology was not that adaptable, but clearly grass was an available resource and P. boisei took advantage of it,” Cerling says. “Even though it’s no longer around, P. boisei’s line lasted half a million years—twice as long as modern humans so far.”