Some creatures just aren't happy spending all year in one house. Here are some of the longest and most impressive yearly voyages by land, air, and sea. 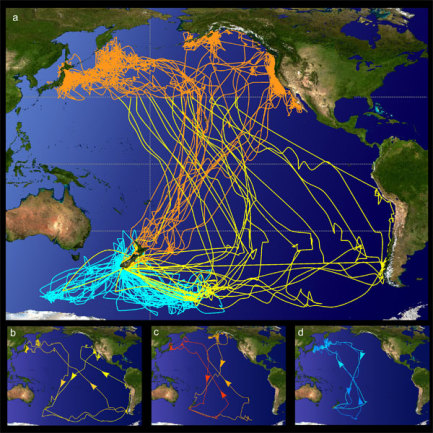 Some humans may be willing to travel far for fine dining, but that's nothing compared to a sooty shearwater: these birds, which are based in New Zealand, fly roughly 40,000 miles each year to reach their seasonal feeding grounds along coastal California, Alaska, and Japan--and some even clock 620 miles in a single day.

Though it looks chaotic at first glance, this migration map, which shows the electronic tracks of 19 shearwaters created by UC Santa Cruz biologist Scott Shaffer in 2005, color-codes the various legs of their trek: light-blue lines track the birds during breeding season, yellow lines represent the northward journey, and orange lines show the winter feeding grounds and southward return. And if you look closer, as the bottom panels reveal, the journeys to the three breeding grounds have one major thing in common: they form figure-eight patterns on a global scale. Unfortunately, as monitoring efforts continue, we may see these pretty patterns cut short: warming temperatures could deplete phytoplankton populations, which means less fish, squid, and krill for the birds to feast on, and could affect whether sooty shearwaters have enough energy to make it back to their New Zealand breeding grounds. 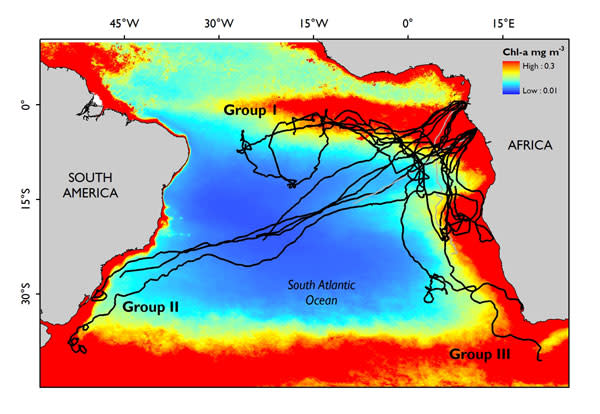 As anyone who's ever seen film footage of newly hatched leatherback turtles can attest, it's hard to imaging the journey in store for these clumsy little creatures: as adults, they'll complete numerous roundtrip treks between West Africa and the east coast of South America--over 10,000 miles of swimming.

Studying 25 female leatherback turtles, biologists recently finished the first cross-Atlantic tracking of these animals. As this migration map shows, the researchers discovered that the turtles have three distinct migration routes; but each route begins and ends at Gabon, West Africa, the turtles' breeding ground of choice. Given that leatherback turtle populations have declined by 98% in the past 40 years (mostly due to being caught in fishing nets), this migration map is crucial in helping to save leatherback lives: thanks to this map, the scientists have already singled out 11 countries that can be invited to help conserve this endangered species.

You'll never see an Arctic tern carrying a trophy in its beak, but it would be perfectly justified in doing so: these tiny birds make an astounding 44,000-mile roundtrip journey between Greenland and Antarctica each year. Arctic terns stole the world record from the shearwater after researchers finally created a tracking device that was light enough to use on them. The tern's feat is even more impressive considering how small it is: it has only a 26-inch wingspan, compared to the shearwater's 43 inches.

This map tracks 11 arctic terns, with green representing autumn migrations, red for winter, and yellow for the spring return route. As you can see, there are two major patterns: terns either rest on the coasts of West Africa or Brazil. The prominent zigzag route, which causes some terns to travel as far as 50,000 miles, is not a case of avian indecisiveness--the birds are actually conserving energy by following prevailing wind patterns. 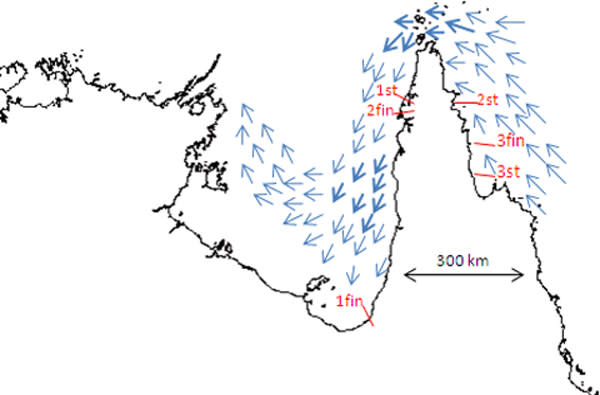 The Arctic tern is impressive, but it doesn't always take a marathon migration to impress researchers--especially if you're studying a notoriously lazy swimmer like the saltwater crocodile. A team of researchers that included the late Steve Irwin (aka "Crocodile Hunter") discovered that Northeastern Australia's crocodiles sometimes swim over 6 miles in a single day. Surprised by these findings, the researchers searched through older tracking data and found that one crocodile averaged nearly 15 miles a day. But there is a catch: a majority of the time, these tagged crocs followed the current flow, thereby minimizing the amount of energy they needed to use.

The migration map above shows the routes of three adult saltwater crocodiles that moseyed their way around Australia's Cape York Peninsula, with "st" and "fin" representing where each track begins and ends. Croc number one managed that entire trek in 25 days, while the second croc rounded the peninsula in 15 days, and the third made a 5-day dash. The arrows show the kinds of current directions the crocodiles experienced while traveling. This go-with-the-flow mentality is somewhat surprising considering that it's specific to long-distance-swimming crocodiles--for short journeys, crocs show no preference for current directions. 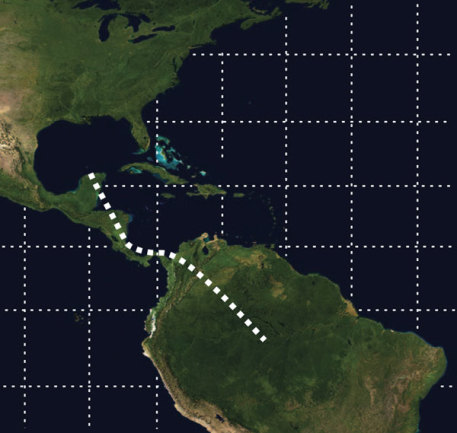 Strapping a geolocator to a bunch of animals is usually a pretty good way to see what kind of migrations they pull off. But it doesn't work if the animals in question can hardly move under the weight of those geolocators: Until the last several years, our tracking devices were too heavy for songbirds. That all changed in 2007, when, for the first time, researchers developed trackers that were light enough for wood thrushes and purple martins; they hooked up 34 birds, and even though only seven of the tagged birds were found the next year, these seven gave the scientists major insight--and newfound respect--into the migratory lives of these silver-voiced flyers.

"We learned that in the fall, purple martins leave the northern U.S. and they fly to the Yucatan in less than a week," says Bridget Stutchbury, a biologist at York University in Canada. "They can fly over 1,000 miles in a mere seven days." They also discovered interesting patterns, such as how the birds fly up to six times as fast during their northward flight than they do in their southward migration. But by and large, the speed of the birds are what really impressed the researchers. "These birds are smaller than a Coke can--the idea that they can travel so far so fast is just astounding to me," Stutchbury adds. 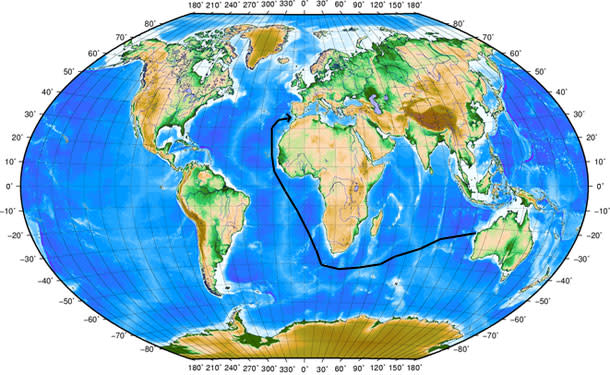 While it may not include the thrill of the chase inherent in the live tracking of animals, DNA is nevertheless useful for discerning migration routes--especially if those migrations happened thousands of years ago. Looking at the DNA of great white sharks, Chrysoula Gubili, a researcher at the University of Aberdeen, discovered something startling: the Mediterranean great white sharks are more closely related to the sharks of Australia and New Zealand than they are to their geographically closer cousins in the Northwest Atlantic.

Based on this insight, and further DNA analysis, Gubili hypothesizes that a single great while female got lost around 450,000 years ago, and found its way to Europe. Based on the water depths at that time, the shark most likely swam from Australia, through the Indian Ocean, and around the tip of Africa, before reaching Mediterranean waters. But of course, without live tracking or any physical evidence of the ancient migration, it's impossible to draw an exact migration path for these predators of the sea. 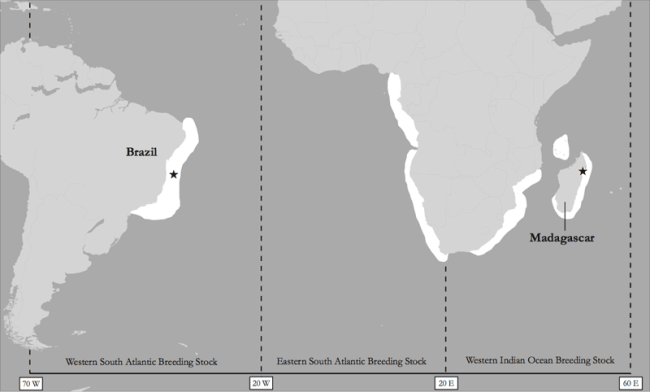 If you're ever hankering to track an animal but don't want to shell out money for expensive electronic transmitters, consider contributing to the Antarctic Humpback Whale Catalogue, a consortium of souls dedicated to following humpbacks. These whales have distinct tail markings, so all you need are photographs of two matching tails to make an identification--and that's exactly how researchers stumbled one whale that swam over 6,000 miles, a mammalian migration record.

The story begins on 7 August 1999, when a female humpback whale smiled for the camera off the coast of Brazil. On September 21, 2001, a whale-watcher near Madagascar happened upon the same whale and captured it with a click. The tail markings reveal that it is the same humpback whale, which puzzles researchers because the over-6,000-mile trek is two times the typical seasonal journey of a whale, not to mention that it's a female; males whales are the ones who normally travel long distances. And since all we have to base this number off of is a starting and ending point, it's possible that she took an indirect path and traveled a great deal more than 6,000 miles. Until scientists put a tracker on this particular whale, you better have your camera ready. 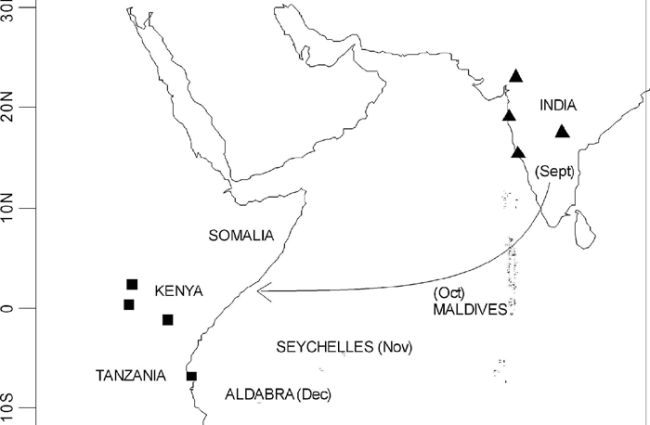 Asked to name the insect with the longest migration, most people would probably say the monarch butterfly, citing its over-4,000-mile trip from Mexico to Canada. Most people would also be wrong.

In recent years, scientists have discovered that the tiny globe skimmer dragonfly (Pantala flavescens) steals the monarch's crown: These bold aviators travel over 11,000 miles during their annual migration.

Because dragonflies are too small to carry tracking devices, researchers had to go to different points in the bugs' journey--India, the Maldives, and East Africa--to see just how far they go. These dragonflies breed in temporary rainwater pools, following the seasonal weather in the Inter-tropical Convergence Zone between India and East Africa.

"It may seem remarkable that such a massive migration has gone unnoticed until now," says biologist Charles Anderson. "But this just illustrates how little we still know about the natural world."