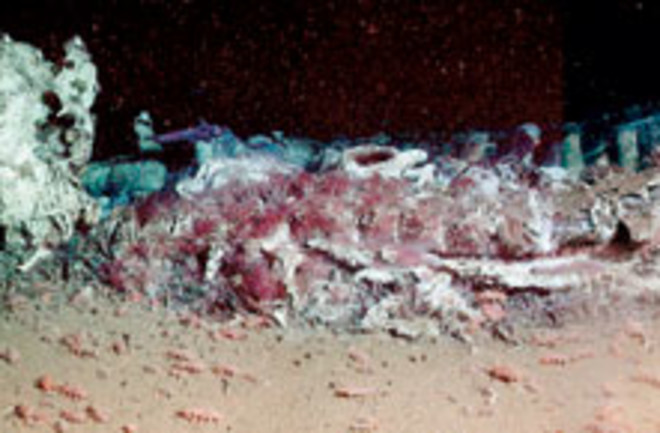 When Robert Vrijenhoek of the Monterey Bay Aquarium Research Institute sent the robotic submarine Tiburon to the nearby seafloor, he and his team hoped it would uncover clam beds. Instead, the sub stumbled across the decaying remains of a gray whale blanketed by strange worms. At first, biologists thought they were ordinary tube worms. Their red feathery crowns seemed common enough, but the worms protruded from the bones. The sub brought up a rib from the mammoth carcass, and the researchers soon discovered the fiery plumes to be the gills of two entirely new species, related to worms, that live near deep-sea hydrothermal vents. Lacking eyes, stomachs, or mouths, they had unusual green, mucousy “roots” extending deep into the bones. Dissection revealed symbiotic bacteria living within the worms, accounting for both their color and their source of nutrition—oils and fats found in bone. “We know of no other animal that exploits lipids through a bacterial intermediate,” says Vrijenhoek. The worms’ dining habits earned them a new genus, Osedax, which means “bone devourer” in Latin.

Researchers were initially stumped by the all-female status of the specimens. A closer look turned up between 20 and 100 microscopic males living within each female, apparently there to do nothing more than provide sperm for a giant sac of eggs. Since Osedax’s discovery, the worms have been found on whale carcasses in shallower waters off the coasts of Southern California and Sweden. “They’re everywhere,” says Vrijenhoek. “It’s just that no one has described them before.”