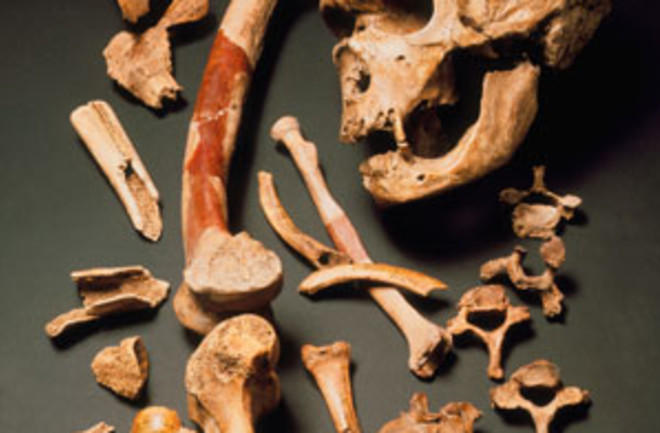 A fossilized Homo neaderthalenis found in 1908 in a cave at La Chapell-aux-Saints, France. | John Reader/Photo Researchers

In May an international group of biologists announced that Neanderthals and modern humans probably had interbred in the Middle East shortly after migrating out of Africa, possibly as long as 100,000 years ago. As a result, many humans today carry 1 to 4 percent Neanderthal genes.

Svante Pääbo and his team at the Max Planck Institute for Evolutionary Anthropology in Leipzig, Germany, analyzed DNA in three Neanderthal bones from the Vindija cave in Croatia, comparing their genomes with those of five present-day humans from southern Africa, West Africa, Papua New Guinea, China, and Western Europe. Neanderthals showed more similarity to people in Europe and East Asia than to those in Africa. “The gene flow between the two groups most likely occurred before modern humans came to Europe about 30,000 to 40,000 years ago,” Pääbo concludes.

Pääbo’s findings are echoed in work from genetic anthropologists at the University of New Mexico. They studied genetic data from 1,983 living individuals across Africa, Europe, Asia, Oceania, and the Americas and concluded that Neanderthals or another ancient hominid group must have interbred with our ancestors at least once, in the eastern Mediterranean, soon after humans migrated out of Africa. That is why we see the Neanderthal genetic fingerprint in all non-Africans, not just in Europeans. Says study investigator Keith Hunley, “We are currently trying to pin down how much interbreeding occurred.”