The 40-foot monster is helping scientists figure out what happened in our hotter past—and perhaps what awaits us in the future. 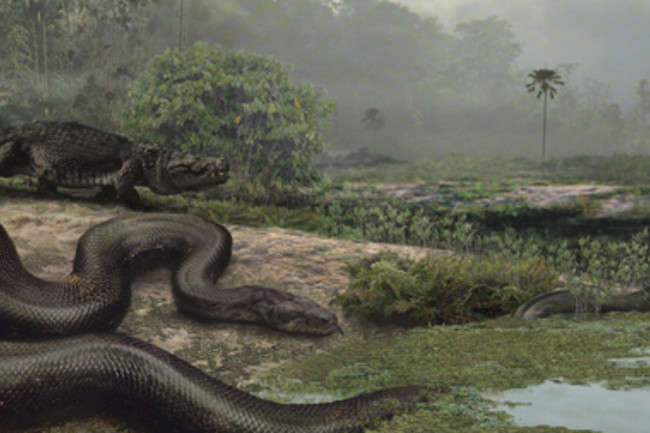 In February researchers announced that they had uncovered the 60-million-year-old remains of Indiana Jones’s greatest nightmare: Titanoboa, the biggest snake of all time. The bones of this 43-foot, one-ton, crocodile-munching behemoth—found amid the remains of an ancient rain forest—are helping scientists understand what the earth was like when the climate was much warmer.

Snakes rely on external heat to regulate their body temperature, and their size depends directly on the climate where they live. So when a team of paleontologists unearthed several huge fossilized snake vertebrae in a Colombian coal mine, the scientists were able to deduce not only how big the creature was but also what the temperatures were like in its era. Assuming the monster snake’s metabolism was similar to that of its living relatives—anacondas and boa constrictors—lead author Jason Head of the University of Toronto at Mississauga estimates that equatorial Colombia must have hovered around 90 degrees Fahrenheit on average, about 10 degrees warmer than the region is today.

The team’s findings, published in Nature, support the idea that during warming periods, temperatures rise across the globe. An opposing viewpoint holds that equatorial temperatures stay roughly constant while excess heat accumulates in higher latitudes. “Most climate models favor a hot equator,” says Paul Koch, a paleontologist at the University of California at Santa Cruz, who did not participate in the research.

Neither scenario would be particularly good news in the context of modern climate change. Head notes that an overheated equator could threaten a sizable portion of the earth’s biodiversity and its people. “These areas are home to much of the earth’s population,” he says. On the other hand, Titanoboa also shows that rain forests can thrive at substantially higher temperatures than they do in the modern Amazon.