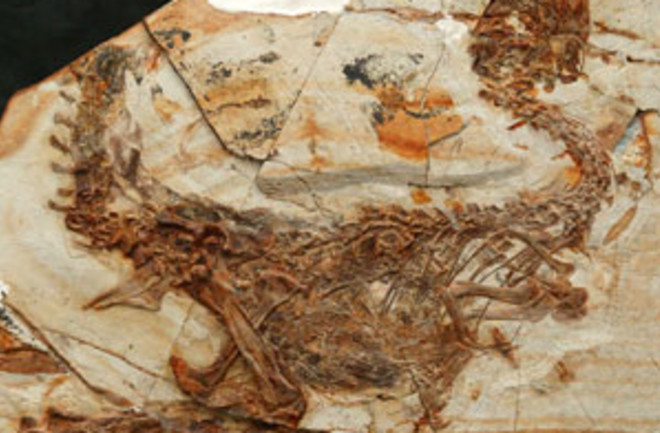 A fossilized Sinosauropteryx, the first dinosaur to have its colors revealed. | Institute of Vertebrate Paleontology and Paleoanthropology, Bejing

Some 125 million years ago, a chicken-size Sinosauropteryx, an early relative of T. rex, scampered through northeastern China. From its remains, we know a lot about this dinosaur: It was covered with spiny hair, it ate meat, and it walked on its hind legs. And now we know what color it was. Last January researchers determined that Sinosauropteryx sported a striped chestnut and white tail—the first time anyone has been able to describe a dinosaur’s color.

Mike Benton, a paleontologist at the University of Bristol in England, had set out to show that Sinosauropteryx’s hairlike bristles were precursors to the feathers on today’s birds. Examining those fossilized bristles through a powerful microscope, he did more than confirm his hypothesis: He also noticed that the bristles were brimming with melanosomes, color-bearing cell parts found in modern avian feathers. The shape of melanosomes determines their hue, and the more packed they are, the darker the shade. The round melanosomes in Sinosauropteryx indicate a dark red shade arranged in a striped pattern.

Now that he knows what to look for, Benton hopes to unveil the colors of other feathered dinosaurs, helping scientists trace their relationship to birds and even decode their social behavior. “These primitive feathers evolved before wings,” he says, “so it’s likely they first evolved for insulation and display rather than flight.”