This article is a small sample from

DISCOVER's special Extreme Earth issue, which you can preview and buy here

Chances are, you’ve seen a cloud that looked sort of like something else—an elephant, Mickey Mouse, Donald Trump’s “hair.” Such cloud shapes, familiar as they are, arise from fluid dynamics so complex that a research scientist could spend her entire career attempting to model them. Weather would be easy to predict if Earth were made of a single material and shaped in a perfect sphere. In that case, conditions would be determined only by the sun’s heat and by the planet’s rotation. In reality, the ragged surface creates giant, rolling waves that ripple through the atmosphere, disrupting the orderly flow of air masses. Commonplace dynamics can then give rise to freak phenomena. And different materials behave in disparate ways. Water heats more slowly than land, creating pressure differences that drive high-speed winds; fast-burning fires spawn flame-breathing vortices; the pressure waves of a plane on takeoff transform water into ice.

Nacreous clouds are not rare, but they are seldom witnessed outside polar regions. They form during the long, frigid winter nights in the Arctic and Antarctic, up to 15 miles above Earth’s surface—high enough to catch a few of the sun’s rays even when the surface lies in season-long darkness. Clouds develop in this high layer of the atmosphere only when the air temperature drops below –117 degrees Fahrenheit, the threshold for water vapor to condense in the stratosphere’s thin, parched air. Ice crystals form where the air is coldest: on the crests of atmospheric waves, which are created far below as moving air rises and falls over mountains. The crystals in each wave are a slightly different size, so they diffract light at different angles. The result is a sky filled with long, slender undulations of color. 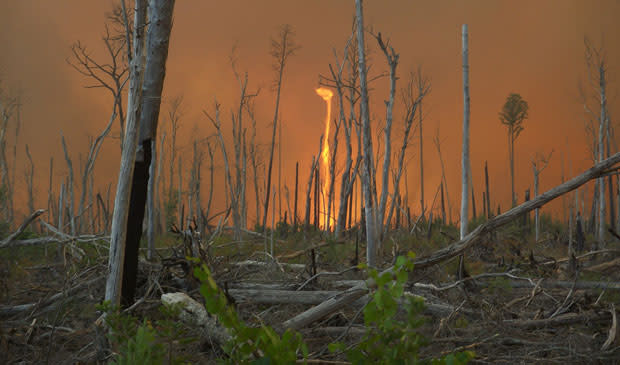 Dry, gusty Santa Ana winds fanned a four-day wildfire in Southern California in 2008, contributing to this tornadolike fire whirl that appeared near homes in Yorba Linda. Fire whirls arise when superheated air above a wildfire drives strong updrafts and downdrafts that get sheared by the wind, causing them to twist into a vortex that funnels flames upward. Fortunately, most of these infernal twisters die out quickly, although some—such as the “dragon twist” that ripped through Tokyo in 1923 in the aftermath of the Great Kanto Earthquake, killing 44,000 people—can grow lethally large.

Dry, gusty Santa Ana winds fanned a four-day wildfire in Southern California in 2008, contributing to this tornadolike fire whirl that appeared near homes in Yorba Linda. Fire whirls arise when superheated air above a wildfire drives strong updrafts and downdrafts that get sheared by the wind, causing them to twist into a vortex that funnels flames upward. Fortunately, most of these infernal twisters die out quickly, although some—such as the “dragon twist” that ripped through Tokyo in 1923 in the aftermath of the Great Kanto Earthquake, killing 44,000 people—can grow lethally large.

For more than a century, witnesses have reported nighttime sightings of brief, glowing tendrils, halos, and streaks around clouds. Scientists were skeptical until a group of researchers captured one on camera in 1989. As it turns out, weird glows—now known as transient luminous events, or TLEs—really do happen above thunderstorms. “Sprites” are columns of red light that can stretch out over 30 miles and extend to altitudes of 50 miles; they always coincide with common cloud-to-ground lightning, though scientists do not understand the connection. “Elves,” by far the most common TLE, are brief, fast-expanding 300-mile-wide doughnut-shaped glows that appear in the ionosphere, about 55 miles above Earth. “Blue jets” move upward from the tops of thunderstorms in a narrow cone and fade away at an altitude of about 25 miles. Based on satellite observations, researchers estimate that thunderstorms around the world generate about 40 TLEs every minute.

Clouds often materialize along the boundary between masses of cold and warm air. Usually the result is a big puff of cumulus, but under certain rare conditions what forms instead is an arrow-straight, rotating tube of fluff—a rope or roll cloud. This one appeared off Las Olas Beach in Maldonado, Uruguay, in 2009. For a rope cloud to form, the leading edge of the cold air mass must be advancing straight and steady, which can happen only if it is flowing over a smooth, flat surface like the ocean. Evaporation from the ocean waters can also lower the density of the air close to the surface to the point that it cannot mix with the air layer above it. With nowhere else to go, the thin layer of low, moist air gets rolled up like a rug by the advancing cold front.

SURF’S UP UP UP

An old, familiar shape shows up in unfamiliar territory. These surflike clouds form in much the same way as ocean waves do. When two layers of any fluid flow past each other at different speeds, they begin to shear. If there are ripples along the boundary between those layers, the shearing action creates centrifugal forces that swirl the fluids—or bodies of air—together. This process happens in the atmosphere all the time, but only under the right conditions of temperature and humidity do clouds like these form, leaving a pattern of near-perfect curls.

Supercooled water droplets in a cloud can remain liquid at temperatures far below freezing, their surface tension preventing solid crystals from forming. As an airplane ascends through such a layer, the wings push air below them and air pressure above the wings drops dramatically, providing lift. The above-wing air expands rapidly and cools to –40 degrees Fahrenheit, the temperature at which supercooled water turns to ice. Newly formed ice crystals fall earthward, and the energy released in their transition from liquid to solid evaporates nearby water drops, leaving a hole in the cloud. This image, a composite of four photographs taken over a period of 20 minutes, captures the dark “fall streak” of the plane-triggered ice crystals, which usually vaporize before they touch ground.