These threatened species include living fossils, scaly mammals, and the biggest rodent ever. 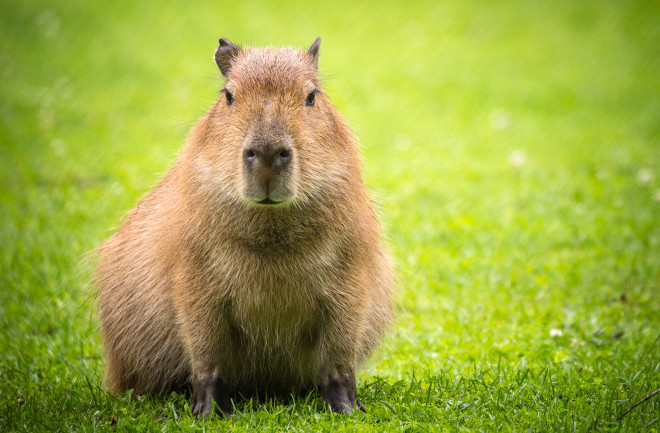 Scientists estimate that there are almost 9 million species of animals in the world, yet 86 percent of land animals and 91 percent of sea animals have yet to be identified. It would take an astounding 1,200 years and the work of more than 300,000 taxonomists to describe the remaining uncategorized species. Unfortunately, many will become extinct before they can be identified. Even among known animals, there are many species that people have never heard of. Here's an introduction to five animals you might not be familiar with, but are definitely worth knowing.

The Amami, a rare type of rabbit, can only be found on two small islands, which are part of the Amami Archipelago in Southern Japan. These 4-6-pound nocturnal bunnies are primitive and related to ancient rabbits that used to live on the mainland, which is why the Amami is often referred to as a living fossil. Their numbers dwindled because they were the prey of other animals, primarily an invasive species of mongoose, which was brought to the islands to eat venomous snakes, but instead focused on the rabbit. The Amami’s numbers fell to only a few thousand, making them endangered. When the government eradicated the mongoose, the rabbit population grew and they were removed from the endangered list in 2013. Interestingly, unlike other rabbits, Amamis only breed twice a year, giving birth to just one or two offspring.

A member of the antelope family, African lowland and mountain bongos have horns and a reddish coat with yellow or white vertical stripes, which serve to conceal them from predators. These animals are generally non-territorial and easily frightened. When scared, these fast runners seek a safer area and, unusually, stand with their backs to the danger. Their markings make them less noticeable from the back, and this position also gives the bongos the advantage of being able to flee more easily. Generally loners, males only interact with other bongos for mating, while females live in small groups. Even though they’re nocturnal, and therefore rarely seen, hunting dogs have been very successful in finding bongos, and these rare antelopes are hunted for their meat and as trophies. There are only about 100 mountain bongos left in the wild, making them critically endangered. While there are larger numbers of lowland bongos (but still less than 28,000), they’re classified as “near threatened” by the IUCN.

The idea of a 100+ pound rodent may sound like something out of a horror movie, but these members of the Rodentia order — the world’s largest — are nothing like the average mouse or ubiquitous New York City rats. These giant but gentle creatures are incredibly friendly, sweet, and loving around fellow capybara and other animals — either in the wild or when they’re kept as pets. Native to South America, the capybara is a semi-aquatic herbivore, which lives in family groups of approximately 10, but as large as 30. Young capybara often become prey to predators such as snakes, crocodiles and humans. Unfortunately, these peaceful animals are hunted for their meat. Several hundred years ago, the Catholic Church classified them as fish (they’re mammals), because they live in water and have webbed feet. The motivation for this was so that they could be eaten during Lent. Capybara have adapted to live near humans, and even coexist with people in residential neighborhoods.

Most people have never heard of or seen a pangolin before COVID-19. Known in Asia and Africa, the rest of the world became familiar with this mammal when it was mentioned as a possible transmission source of COVID from animals to humans. Although they look similar to an anteater or armadillo, the world’s only scaled mammal is actually more closely related to bears, cats and dogs. Pangolins have existed for 80 million years and are now in danger of extinction. An important part of the ecosystem, they excel at pest control by feeding on up to 70 million insects yearly. Ironically, even though the pangolin is not widely known, it is the world’s most poached and trafficked animal, with up to 200,000 pangolins eaten each year. Among certain schools of traditional medicine, it has long been believed that consumption of pangolin meat and scales provides medicinal and sexual benefits. In an effort to reduce trafficking, the Chinese Government removed pangolin scales from its list of traditional medical treatments in the Chinese Medicine Pharmacopoeia.

Of course, we’ve all heard of the octopus and squid, but many people don’t know about the giant squid. With eyes as big as dinner plates, these enormous animals live at ocean depths of 3,000+ feet in the North Atlantic and North Pacific. The largest of the cephalopods, which date back 500 million years, the giant squid can reach 30 feet in a short time. With a lifespan of only 5 years,  their ability to grow at such an impressive rate indicates an ample supply of food and lack of predators. But the squids do have a formidable predator in the sperm whale, who will dive thousands of feet to reach their prey. The largest giant squid that we know about reached almost 43 feet and weighed close to a ton. Up until about ten years ago, working knowledge was gleaned from dead, floating giant squids that were found by fisherman. Then in 2012, Japanese scientists working with the Discovery channel filmed a giant squid in its natural environment for the first time. As for how they propagate, scientists have developed theories about the mating habits of the giant squid, but aren’t completely sure. However, it is believed that they mate only once in their lives.