5 Ways Yeast Will Help Save Lives 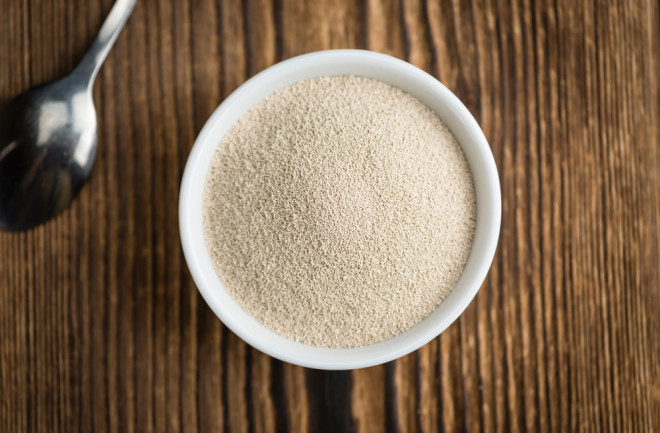 A bowl of dried yeast. (Credit: Shutterstock) Try to imagine life without yeast. It’s kind of a bummer. The single-celled fungi are the leavening agents that gave rise to sourdoughs, ciabattas and chewy pizza crusts. They’re the microorganisms that convert sugar into carbon dioxide and ethanol to give beer and wine its intoxicating effects. They are used to produce insulin. You can buy yeast supplements. Yeast also played an instrumental role in a Nobel Prize win earlier this week. Yeast, it turns out, is a life-saver. Although there are some 1,500 different species, it is one of the most well studied eukaryotic organisms known to science, and it’s serving on the front lines as a model organism for cutting-edge research in genetics, biology, agriculture and medicine. Here are five reasons we owe this simple organism a debt of gratitude.

Saccharomyces cerevisiae is the yeast strain often used in baking and brewing. (Credit: Wikimedia Commons) Over the past decade or so, the opioid epidemic in the United States has steadily worsened. Since 1999, deaths from prescription opioids (drugs like oxycodone or methadone, for example) have quadrupled. At the same, the number of opioids prescribed and sold in the U.S. has also quadrupled. In 2015, Stanford University synthetic biologist Christina Smolke and her team used strains of genetically modified baker’s yeast to convert glucose into opioid precursors. Her team borrowed 23 genes from plants, bacteria and even mice, and spliced combinations of them into three strains of yeast. Then, these three strains worked together as an assembly line to perform chunks of a 15-step, glucose-to-painkiller chemical reaction. Basically, they brewed opioids. Depending on their genetic tweaks, scientists could theoretically design yeasts that yield less addictive, safer compounds that still provide needed relief. Scientists might also fit all the key genes into a single strain, which could perform the reaction all on its own. Still, there’s a lot of work needed to scale up production: it took 4,400 gallons of bioengineered yeast to produce a single dose of pain relief.

The Wiring of Cellular Life

We learn the basic parts of the cell and how they function in foundational biology classes, but scientists only recently figured out how genes work together to drive these functions. In September, researchers from the University of Toronto and the University of Minnesota-Twin Cities released its most comprehensive map of a cell's genetic network. Scientists used genes in yeast for their work because most of yeast’s 6,000 genes are also found in humans — it’s a great place lay the foundation a similar map of human gene function. Essentially, they created an organizational flow chart of how genes work together, and they operate in hierarchical groups, kind of like departments in a large company, to support cell life.

The global network of yeast genes. (Courtesy: University of Toronto) As part of its work, the team discovered “synthetic lethal” genes that are locked in a work-share arrangement of sorts — destroy one and its coworker will pick up the slack. But take both out, and you’ll kill the specific function that the pair accomplishes in the cell. The team uncovered these relationships through a meticulous process of elimination — they knocked a gene out, noted how it affected cell function and repeated. This information is crucial for developing more refined approaches to treating genetic diseases; that is, once scientists map they way humans’ 20,000 genes interact. With this reference map, doctors, for example, could target mutated cells causing health problems by targeting their “back-ups” — a precision strike that could preserve healthy cells. These are important insights, and it all started with yeast.

As mentioned above, Yoshinori Ohsumi won this year’s Nobel Prize in physiology and medicine after describing the mechanisms driving autophagy, or the ways cells break down and recycle cellular material. If cells don’t regularly tidy things up, wastes can accumulate and can cause disease. Ohsumi discovered key autophagy genes in, you guessed it, yeast. His discovery helped other scientists identify genes in mammals that perform similar maintenance functions. His work, which began two decades ago, has built the foundation for studying how autophagy genes work in humans. Today, researchers remove these genes from cells and lab animals to test their function, revealing the important role autophagy plays in neurological diseases and cancer.

Two years ago, scientists synthetically engineered an entire baker’s yeast chromosome — number 3 of 16 — for the first time with a eukaryotic cell. Researchers had previously synthesized bacterial DNA, but eukaryotes are far more complex. Rather than splicing genes from other organisms or disabling specific genes, designing a yeast strain from scratch gives researchers more precise control of its function. Researchers who built the first yeast chromosome showed off their work and manipulated yeast growth rates by tweaking their chromosome. Improved control would make it easier to put yeast to work synthesizing drugs or producing beer flavors we’ve never tasted before. Now, the task is to construct all sixteen chromosomes.

Yeasts also play a key role filling bellies. In September, researchers used modified yeast cells to monitor how plant genes and proteins respond to auxin, which is the most ubiquitous plant hormone. Plants that don’t respond normally to auxin messages, for example, can have severely stunted growth. Feeding more people than have ever existed on the planet, along with the pressure of climate change, requires scientists to understand the even most minute details of plant growth to maximize yields.

The yeast toolkit will help researchers untangle the auxin code, which could help scientists optimize hormone pathways and design crops that exhibit useful traits. At a more fundamental level, plants have come to rely on naturally occurring yeast strains. In 2015, researchers isolated 538 yeast strains from soil beneath legume crops, and found that many of these strains inhibited the growth of pathogenic fungi. And in several other experiments, adding yeast strains to the soil improved plant nutrition and improved vigor during early growth stages. It’s no surprise then, that scientists are looking at new ways to use yeasts in cost-effective bio-fertilizers. The next step is to establish how, exactly, each yeast strain contributes to plant health.