This apex predator isn’t really white and doesn’t snack on humans as much as you’ve heard. 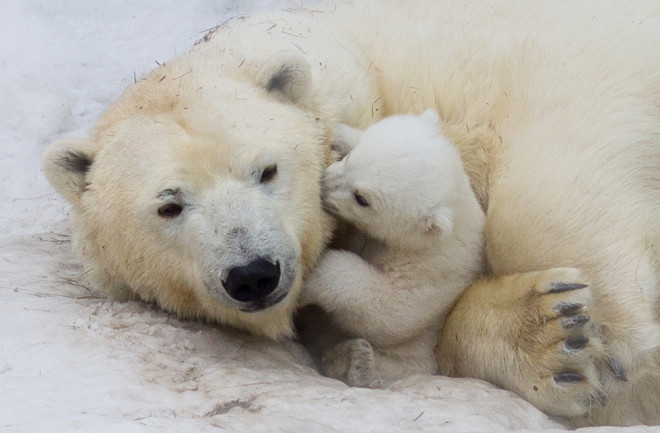 It’s Polar Bear Week, a celebration of the eponymous animals and their annual migration to Churchill, Manitoba, Canada. Once they converge on Churchill, polar bears await the sea ice to form on Hudson Bay so they can hunt for seals. If you’re interested, you can actually watch a live stream of the migration. Meanwhile, here are some facts to help you get to know this Arctic keystone species.

Polar bears start out as very cute small cubs that weigh in at about one and a half pounds at birth, but they grow to be the largest carnivorous land animal. Male polar bears can reach 1,700 pounds and females weigh up to 1,000 pounds. They are excellent swimmers and live in the Arctic, but can also be found in Canada, Alaska, Russia and Greenland. Polar bears have flat feet with webbing between their toes, and bumpy footpads that enable them to get traction while walking on ice — wide paws help to distribute all that weight, preventing them from falling through. Their main food sources are ringed and bearded seals, which also live in the Arctic. But if available, these bears will also eat whale carcasses, walruses and bird eggs.

They’re Not That Old

The evolutionary history of polar bears isn’t settled science. Because the ice they live on is in a constant state of flux — floating, freezing, melting, and refreezing — fossils are seldom discovered, making it difficult to precisely date their origins. The oldest known polar bear fossil dates back approximately 110,000-130,000 years, with DNA suggesting there was hybridizing (breeding between two species) between polar bears and brown bears. Based on available evidence, polar bears have not been around that long, considering that bears in general have existed for 30-40 million years. Despite the lack of agreement about how old they are, there is pretty uniform consensus that they diverged from the brown bear about half a million years ago.

Polar bears’ hair is clear, with a hollow core and microscopic bumps that act to scatter light. When light beams bounce around within the hollow cores of the hair, they create luminescence, forming a whitish hue that accounts for the polar bear’s trademark appearance. Another contributing factor to the white color is keratin — a type of protein found in human hair and nails. Keratin is also found in the animal world, generally in hooves and horns. But in the case of polar bears, keratin is present in their outer layer of hair, which has a whitish color. Of course, this allows them to blend in with their surrounding environment of snow and ice.

Underneath that white aspect, polar bears actually have dark skin. This helps polar bears to absorb the sun’s heat and offers protection from harmful UV rays. Interestingly, polar bears are born with a pink tongue that develops black patches over time. Their inner cheeks and the roofs of their mouths are also dark.

No, They (Probably) Wouldn’t Attack You

Along with lions, crocodiles, and killer whales, polar bears are apex predators — meaning they’re at the top of the food chain, with no natural predators of their own to worry about. But they’re unfairly portrayed as being quick to attack people. In fact, records show only 73 recorded attacks on humans by polar bears in 144 years, between 1870-2014. Of those, 20 were fatal. But polar bears don’t attack for no reason, typically doing so only if they’re starving young males, females protecting their cubs, or provoked. Although highly unlikely, should you ever find yourself being approached by a polar bear, there are a couple of things you can do. Raise your arms and speak in a calm, low voice. This lets the bear know you’re not animal prey. As with all bear attacks, don’t run! This can trigger their prey drive.

But They Have Reason To Fear Humans

Climate change is the biggest threat to polar bears, but hunting is second. These majestic creatures are hunted for food, as well as to make clothes and crafts. Between the 1600s and the early 1970s, American hunters negatively impacted polar bear populations. The Soviet Union was the first to ban polar bear hunting in 1956, followed by a United States ban on polar bear trophy-hunting in 1972. The last place to allow polar bear trophy-hunting and export of skins is Canada. Most polar bear hunting is done by indigenous people, who are permitted to keep or sell bear skins. Hunting regulations are linked to a quota system based on population estimates, but indigenous people can sell their hunting rights to non-native hunters. Although subsistence hunting is part of indigenous people culture, a profit-driven element does exist, unfortunately for the bears.