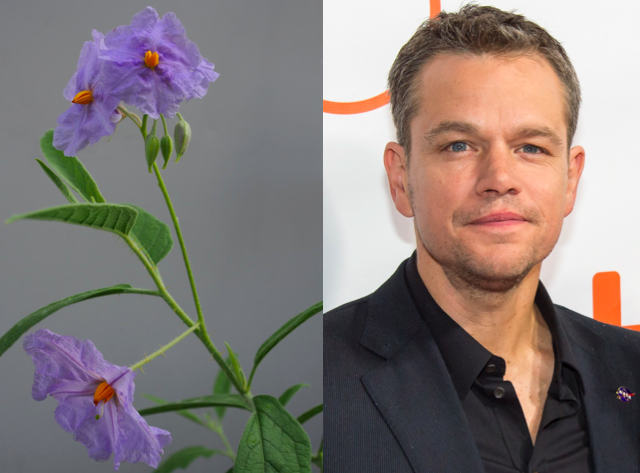 The hero of The Martian, one of the films up for Best Picture at this weekend's Academy Awards, isn't unusual because he's a scientist—he's unusual because he's a plant scientist. Books and movies rarely even try to make botany seem cool. Yet Mark Watney, played by Matt Damon, is definitely meant to be cool. "I am the greatest botanist on this planet!" he declares after being abandoned on Mars. Real plant scientists are thrilled to see a cool botanist on the big screen. Chris Martine, a professor at Bucknell University who studies plant reproduction, called the movie "perhaps the finest paean to botanical science (and botanical field work) that Hollywood has yet presented." And he marked the occasion fittingly. When Martine discovered a new plant species in the Northern Territory of Australia, he named it after Mark Watney. The plant, Solanum watneyi, is a kind of bush tomato, a flowering shrub that lives in dry parts of Australia. Bush tomatoes are related to potatoes—the plants that keep Watney alive on Mars. Solanum watneyi also has a few things in common with Matt Damon himself:Hangs out in reddish soil In its native Australia, Solanum watneyi lives in reddish, Mars-like dirt. After filming on the dusty red sets of fake Mars, of course, Matt Damon got to go home. (The movie also used footage from Wadi Rum in Jordan to stand in for the Martian landscape.) Good genes The bush tomato is a close relative of the potato. It's also in the same genus as the tomato and the eggplant. Some other Solanum plants are extremely poisonous. Matt Damon might not have any dangerous family members, but like the bush tomato, he does seem genetically fortunate. "Prickles sparse, straw-colored, straight" When naming a new species, real-life botanists have to describe every last detail of the plant. The description above is what Martine and his coauthors gave to S. watneyi's tiny prickles. But it could also fit the grody beard that Matt Damon wore near the end of the movie. "Firm" when matureS. watneyi has yellow berries that the scientists describe as firm at maturity. This is one of the traits distinguishing the new species from its close relative S. eburneum, which has "soft, squishy" fruits filled with liquid. Matt Damon, 45, seems to exercise a lot and appears quite firm onscreen. (A scrawny body double shows up near the end of The Martian to portray an undernourished Watney, but doesn't fool anybody.) Thrives on buzz Martine and his coauthors speculate that S. watneyi's flowers are likely "buzz pollinated." This is when bees shake pollen loose from a flower by holding tight and vibrating their bodies. Matt Damon and The Martian, for their part, were already generating Oscars hype before the movie came out.