5 Questions: From Fossils in Rocks to Stadium Rock 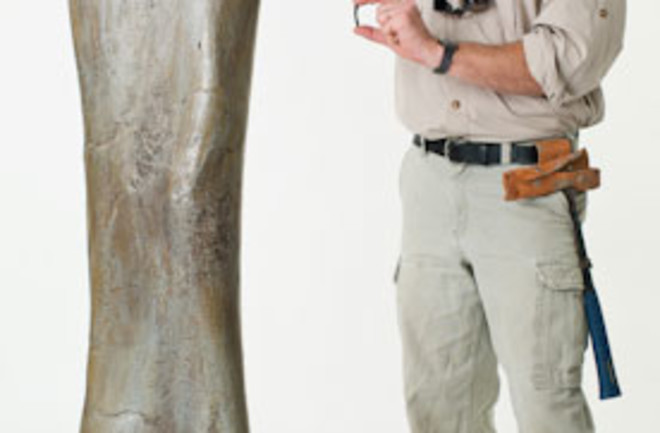 Gregory Erickson was a construction worker at the University of Washington football stadium when he decided his true passion was dinosaurs. Now at Florida State University, he is, among other things, developing novel ways to tease out the life cycle of T. rex and Apatosaurus from long-dead bones.

What drew you to dinosaurs? As a kid I loved dinosaurs, but in college I wanted to be an engineer. Then I took a dinosaur class in my junior year and found a triceratops skull. When I graduated I was a construction worker for about a year before deciding to go back to grad school. Jack Horner [the renowned paleontologist] took me in—I think he liked that I knew how to use a shovel.

How did you set about measuring the age of an animal that lived 70 million years ago? I was at the Field Museum in Chicago and noticed these growth lines in the bones of a T. rex. This is an $8.65 million investment, and I’m saying, “Can I cut up your priceless dinosaur?” Fortunately I got the approval, and that springboarded the work.

How do bones reveal the dinosaur life cycle? Using bones from throughout development, we count growth lines to determine age. Using the femur we estimate weight. In T. rex we see tremendous mortality in the first year; then it levels off until sexual maturity, when the mortality rate increases again. A lucky tyrannosaur would live 30 years.

You met with the makers of Jurassic Park. How did that work out?

I took the crew out and showed them what a quarry looks like. Paleontologists lie out for days chipping away, so I hoped that what stuck would be the idea that it takes a long time to get these bones out. Then I see the movie, and in the opening scene, the scientists just brush some stuff off and the whole animal is exposed. It was embarrassing.

What kind of music do you work to? The Stones, The Who, AC/DC. I teach a course in dinosaurs that has 1,500 students. I call it Stadium Rock. It reminds me of going to see The Who in the Kingdome in Seattle. I wear a portable microphone and run around.