Spiders use their silk for a variety of things, and humans have found uses for it, too. 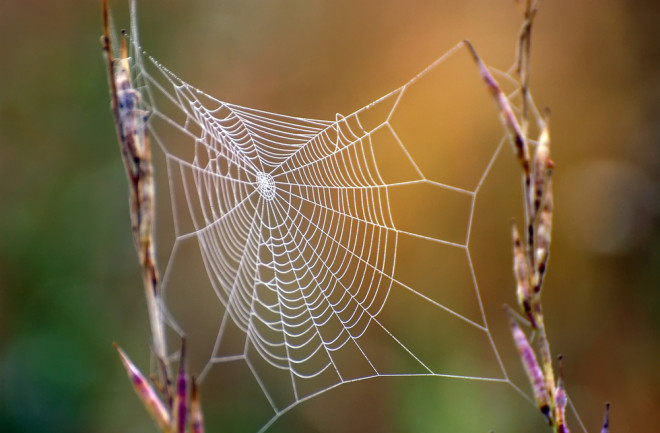 Though all spiders produce silk, not all spiders spin webs. In fact, out of more than 40,000 types of spiders that exist, only half of them make webs. Even though the feeling of walking through a spider web can give you the heebie-jeebies, spider webs are natural marvels of construction and strength, with many interesting aspects to them. Here are five interesting ways spiders and humans can use spider silk.

While there are actually four types of spider webs — funnel, tangled, orb and sheet — orb webs are the most common. They have a frame and spoke-like pattern. Orb weavers will typically redo their webs daily and can remember spaces they’ve used before. Highly effective, these webs can trap up to 250 insects a day. Sheet webs lay flat over grass and branches — like a sheet. Spiders either hide under the edge or in between two layers of webbing. When prey appears, they bite it through the silk and pull it inside.

When you think of spiders, you typically think of their webs. Spinning webs is the main use of silk for web-building spiders. Spiders usually spin their webs at night. They have organs called spinnerets, which have spigots at the end. A single silk thread comes out of each spigot, which is connected to a silk gland. The spider’s back legs put out the silk threads. From there, it depends on the type of spider to determine what’s involved with the rest of their web-spinning process. For some orb-weaving spiders, their web provides them with a source of protein. When they take down their web at night, they consume it. The protein returns to the silk glands and spiders will use it to construct a new web. Besides using their webs to catch prey, spiders use them to create a safe place for their eggs.

Spider webs are rich in the coagulant Vitamin K, which helps stop bleeding. Ancient Greeks and Romans used spider webs to treat soldiers’ bleeding wounds. It’s believed that they would first clean wounds with honey and vinegar, and then cover them with balled-up spider webs. In India, it’s not unusual to use spider webs to promote healing. Researchers in India created a spider web ointment that contributed to healing in rats. The medicinal use of spider webs inspired scientists in England to create antibiotic synthetic spider silk — which could potentially be in dressings to treat diabetic wounds. Researchers are also studying how spider silk can help treat burns.

Spiders vary in size, from almost imperceptible to larger than a human hand. Experts believe the smallest is the Patu digua, which can be as small as the head of a pin. On the opposite end of the spectrum is the giant huntsman spider which can reach a 12-inch leg span. Just as spiders’ bodies range in size, so do their webs. Researchers found webs spanning up to 82 feet, created by the Darwin’s Bark spider — known only to exist in Madagascar. Conversely, the smallest webs belong to members of the Symphytognathidae family and reach only one-quarter inch in size. Though spiders can build large webs to trap prey and lay their eggs, they also use their webs as a form of transportation. Spiders release a string of silk into the air and let it carry them on air currents to a new location.

There are seven types of spider silk, and a different gland produces each type. While most spiders don’t have all seven, many spiders produce several types of silk. While scientists don’t yet fully understand everything about what makes spider silk so strong, they do know that it’s related to the protein chains that spider silk is made of. When researchers used an atomic force microscope to study the silk of brown recluse spiders, they found that each silk strand consisted of thousands of parallel nanostrands. While each strand is 1000 times thinner than a human hair, it’s five times stronger than steel. Check out this video explaining more.