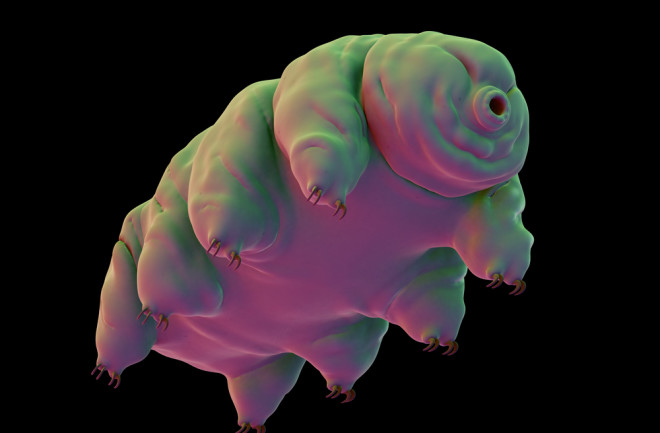 An illustration of the water bear. (Credit: Sebastian Kaulitzki/Shutterstock) Hidden among us are survivors – living, breathing beings that have pulled off some pretty remarkable feats in order to live another day. They can be found ambling through the moss beneath our feet, drifting in our oceans and our streams, even stuck in the local pet store or on the subway. You just have to know where to look. These creatures give clues into how we could withstand extreme conditions, regrow damaged tissue or missing limbs, turn back the hands of time, guard ourselves from illness, and perhaps even achieve humankind’s most elusive goal – immortality.

The resilient water bear. (Credit: Sinclair Stammers) Tardigrades are the toughest creatures on the planet. These microscopic animals known as moss piglets or water bears can live for a decade without food or water, endure temperatures near absolute zero or hotter than boiling water, withstand exposure to radiation 1,000 times the lethal dose to humans, and even travel through the vacuum of space relatively unscathed. Water bears are so remarkable that some people have wondered if they could be from another planet. A recent study gives another explanation: these cuddly creatures took their survival skills from other species here on Earth. A team led by Bob Goldstein at the University of North Carolina at Chapel Hill decoded the genome of a water bear and found that about one-sixth of the animal's genes are derived from bacteria and other organisms. Previously, no animal was known to have such a high level of what is called "horizontal gene transfer," whereby genes are passed from one unrelated organism to another like a lateral on the football field, rather than handed down “vertically” from parent to offspring like a family heirloom.

An illustration of Turritopsis nutricula, which is nearly identical in appearance to Turritopsis dohrnii, the "immortal jellyfish. (Credit: © 176/Ocean/Corbis) Some tortoises and clams, flatworms, sea anemone, and jellyfish never age, a principle known in biology as “negligible senescence” that many have likened to immortality. Tortoises move slowly and have slower metabolisms, which may ultimately result in slower aging. Planarian flatworms keep young by continuously regenerating their telomeres, the protective caps at the end of chromosomes that shorten over time in most organisms. But the only truly immortal creature is a tiny, transparent jellyfish, Turritopsis dohrnii, that can be found floating in ocean waters around the globe. The immortal jellyfish cheats death by pulling a Benjamin Button, essentially turning itself inside out and absorbing its tentacles to transform its adult form into a baby polyp. Any time this organism is injured or stressed, it drops down to the ocean floor and begins anew, like a wounded butterfly morphing back into a caterpillar. Some researchers believe that understanding this “reverse metamorphosis” could lead to new therapies to halt or reverse aging in humans.

A planaria flatworm. (Credit: Jubal Harshaw/Shutterstock) A few lucky members of the animal kingdom can regenerate missing body parts or repair damaged organs. Starfish can regenerate a lost limb; salamanders can grow back a pinched tail or fix a severed spinal cord. The most impressive trick of all is performed by minuscule, arrow-shaped flatworms called planaria. Cut off a planarian's head, and the creature will simply sprout a new one in its place. Chop it into pieces, and each piece will produce an entirely new worm. Scientists have known about the regenerative capabilities of these freshwater flatworms for hundreds of years. Most of its cells act like stem cells, those cellular entities that can replenish dead or damaged cells flowing through our bloodstream, lining our gut, or covering our skin. Alejandro Sánchez Alvarado at the Stowers Institute for Medical Research has been drawing a genetic flow chart to describe how regeneration unfolds in planaria. For example, he discovered that a gene called "disheveled" can help an injured organism figure out whether it needs to grow back a head or a tail.

What the Mexican cavefish lacks in sight, it makes up for with its appetite control. (Credit: H. Zell/Wikimedia Commons) Anyone who has visited a pet store has probably encountered the Mexican cavefish. These funny-looking pets don’t have any eyes and also lack any pigmentation, lending an otherworldly glow to their piscine bodies. But don’t let their docile nature fool you – these aquarium oddities have survived evolutionary forces at their most brutal and unforgiving. At some point in their distant past, these fish became trapped in pitch-black underwater caves, where the only food available was swept in with the annual flood. Over time, the survivors discarded unnecessary attributes, like eyesight and coloring, and picked up new ones, like starvation resistance. One way they adapted to these punishing cycles of binge-eating and starvation was through alterations in a gene called melanocortin or MC4R, which enabled the fish to eat without limit and pack on the pounds to hold them over until their next meal. Mutations in MC4R also give people an insatiable appetite and are the most common genetic cause of obesity.

(Credit: VGstockstudio/Shutterstock) Every day, we encounter trillions of illness-inducing viruses and bacteria. Yet some people seem to never get sick. While certain practices like hand-washing and safe sex can go a long way to avoid disease, some fortunate individuals have extra protection hard-wired into their genes. For example, people born with a specific mutation in the CCR5 gene are naturally resistant to HIV infection. The CCR5 protein acts like a door that lets HIV into the cells; without it, the virus is locked out. Researchers traced the mutation back 700 years to the time of the Black Death and suggested that those with the mutation were more likely to survive the plague and pass on their genes to current generations. Today, a massive study called the Resilience Project is searching for other protective genes lurking in the human population. It will scan the genomes of one million volunteers for 685 mutations responsible for 127 different diseases that usually appear early in life. The rare individuals who harbor these defects and have survived into adulthood could hold the key to protecting the rest of us from disease.