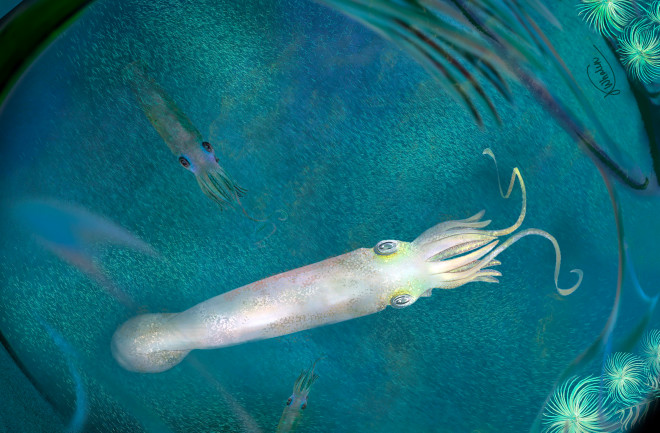 Researchers at Yale University and the American Museum of Natural History have identified an ancient squid species fit for a president.

Originally discovered in central Montana, Syllipsimopodi bideni — named after U.S. President Joe Biden — is the earliest known relative of octopuses and vampire squid. The species lived 328 million years ago and is the only known vampyropod to have 10 functional arms (in addition to fins and rows of suckers to grasp prey). Biden had just been inaugurated at the time the study was submitted for publication, and researchers wanted to recognize his commitment to science, they say.

Named after Colombian singer-songwriter Shakira, the Aleiodes shakirae is one of 24 new aleiodes wasps discovered in the Andes mountains in 2014. They are a type of parasitic wasp, which attack and destroy their hosts — typically by eating the host or laying their eggs inside of them. The A. shakirae lay their eggs in a caterpillar; when the eggs hatch, the wasp larvae eat the inside of the caterpillar until it shrinks, dies and becomes mummified. Eventually, the adult wasp breaks out from the mummified shell. The entomologists who discovered the new aleiodes named this species after Shakira because the wasp causes the caterpillar to wiggle and shake, reminding researchers of belly dancing. Other celebrities the new aleiodes wasps were named after include comedians John Stewart, Stephen Colbert and Jimmy Fallon, and poet Robert Frost.

In 2021, researchers and Metallica fans Dr. Luis Ceriaco and Mariana Marques named a newly identified African bush viper Atheris hetfieldi after James Hetfield, the front man for the heavy metal band. “We wanted to honor him, as a thank you for all the good vibes his music has transmitted to us during all of our personal lives and careers,” said Ceriaco in a press release. Found at the base of a volcano on Equatorial Guinea’s Bioko Island, it was the first new snake species discovered there in more than 100 years. “We think that a mysterious venomous and cool-looking snake, who lives in the base of a volcano lost in the middle of the tropical forest is very relatable to heavy metal!” said Ceriaco. The A. hetfieldi grows to about 20 inches long and possesses keeled scales (which have a ridge down their center) and triangular head.

Found in western Madagascar, the Bemaraha woolly lemur, also known as Cleese’s wooly lemur, was named after Monty Python comedian John Cleese. Cleese developed an affection for lemurs through his work on a documentary called In The Wild. Discovered in 1990 by Zurich University, the species was formally described in 2005. Weighing between 11 and 13 pounds, they have brown fur, large eyes and a short nose. This diurnal (active during the daytime) animal is a vegetarian, with a diet of leaves and buds. Lemurs are native only to Madagascar, which has been isolated for about 88 million years and is a hotbed of biodiversity. The island has at least 700 vertebrate species and 12,000 plant species, over 80 percent of which aren’t found anywhere else in the world. Unfortunately, lemurs are the world’s most endangered mammals.

In 2012, marine biologist Paul Sikkel discovered a new species of gnathiid isopod. He named this parasite after reggae musician Bob Marley — while colloquially known as the Bob Marley parasite, its scientific name is Gnathia marleyi. At the time, Sikkel said “I named this species, which is truly a natural wonder, after Marley because of my respect and admiration for Marley’s music.”

As juveniles, these parasites hide in coral reefs waiting for certain fish to swim by. Once the fish is in sight, the paraside quickly emerges, attaching themselves to the fish and feeding off their blood. Once the parasite reaches adulthood they no longer eat. Not surprisingly, adults only live two to three weeks, based on their last feeding.

Named after famed British broadcaster and naturalist David Attenborough, the Materpiscis attenboroughi was a prehistoric armored fish. Belonging to the placoderm class, a fossilized M. attenboroughi was found in Australia in 2005. The word “materpiscis” means “mother” in Latin and is quite fitting for this discovery. Inside the well-preserved specimen, researchers saw the skeleton of a baby — umbilical cord still attached. This finding led to the realization that live birth dated back approximately 380 million years, much older than had been previously hypothesized. It also supported the idea that internal fertilization among vertebrates started with primitive fish. M. attenbrooughi are similar to sharks of today, and among the first fish to have jawbones. The fossil that was found was about 10 inches long, and its baby was about one-quarter of its size.