Who needs dinos when you have awesome sharks and horses and scorpions! 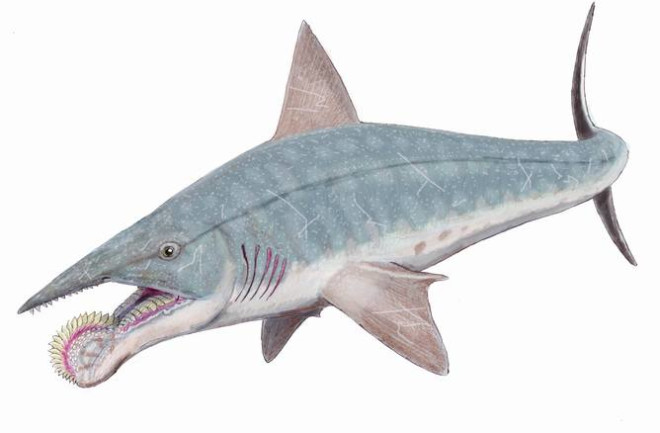 The release of Jurassic World has reignited our love for paleontology. Many of us share a longing to understand the dinosaurs that roamed the Earth long before we arrived. But paleontology is a discipline much broader than this.

Dinosaurs dominated the land for 135 million years, but what happened during the rest of the Earth’s 4.6 billion-year history? The role of paleontologists past and present has been to unravel the mysteries of life on Earth, and in doing so they’ve found a lot more than just dinosaur bones.

Hallucigenia was discovered when a 508 million year old fossil was found in 1911 in the world-famous Burgess Shale fossil site in Canada. Since then, our understanding of this ocean-dwelling creature has changed dramatically.

Its age means it falls into the geological Cambrian period, a pivotal moment for all life on Earth when complex lifeforms started to rapidly evolve. When originally described, Hallucigenia was first thought to have walked along the ocean floor on spiny legs and used tentacles on its back to catch food. Paleontologists also argued over which end was its head.

But when a similar fossil was found in China, Hallucigenia was re-examined. Paleontologists then discovered that its “legs” were actually protective spines on its back, and the tentacles formed two rows on its underside enabling it to “walk.” Researchers are still debating many of the features of Hallucigeniatoday, more than 100 years after it was discovered.

100 million years on from Hallucigenia, aquatic habitats were thriving, but life on land was still in its earliest stages. Tiktaalik, part fish, part four-legged animal, is believed to be the first creature to develop characteristics that would help animals move out of the water and on to land.

It had gills, fins and scales like a fish, but also evolved features such as a flexible neck and a reptile-like head and lungs, beneficial for life on the ground. Fossils also show Tiktaalik had long fins that acted as legs, meaning it could “walk” along riverbeds as well as swim.

Pulmonoscorpius kirktonensis, a 70cm-long scorpion, lived in what we now know as Scotland 340 million years ago. At a length greater than that of the average pet cat, this terrifying creature used its tail to catch and kill its prey.

Pulmonoscorpius also had unusually large eyes compared to its modern relatives, so most likely hunted during daylight hours. Scorpions shed their skin as they grow, so fossils of both the skin and the animal itself have been found.

Helicoprion, a shark-like fish alive during the Permian (290 million years ago), had a rather unique dental structure. With a face that baffled paleontologists for years, this creature had a lower jaw made up of a spiral of teeth, known as a tooth-whorl.

Modern sharks are able to lose and replace their teeth, but Helicoprion kept them all, with older teeth hidden within the inner layers of the tooth-whorl. When it caught its prey (most likely relatives of the squid), it would close its mouth and rotate its tooth-whorl to shred its catch.

The Messel Oil Shale, once a volcanic lake in Germany, has plenty to offer the world of paleontology. Eurohippus messelensis was a miniature horse (the size of a modern-day fox) originally thought to have died from eating fermented berries and, in a drunken stupor, fallen into the lake. It’s now believed the 47-million-year-old horse actually died from inhaling toxic gas occasionally released from the depths of the lake.

But the misfortune continues, as it was later discovered that the horse was pregnant. Paleontologists used high-resolution microscopes to identify the bones of a foal within the adult Eurohippus, improving our understanding of fetal development in these animals.

Paleontology is a career firmly seated on many childhood wish-lists alongside movie stars and astronauts, and rightly so. But it’s important to remember there’s a lot more to paleontology than the dinosaurs. This list is just the start.