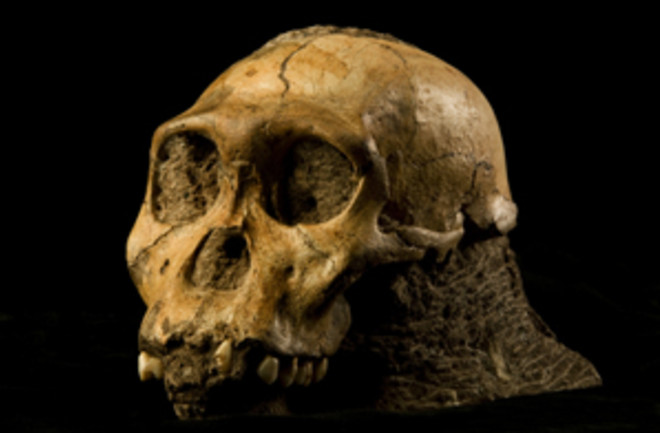 When paleoanthropologist Lee Berger unearthed a fossil near Johannesburg, South Africa, it seemed to be a jumble of parts: a braincase similar in size to that of an Australopithecus africanus, a Homo erectus pelvis, and the arms of a Miocene ape. But in April Berger announced that they all belonged to the same skeleton, that of a 12-year-old boy who lived 1.9 million years ago. The boy, called Karabo, may represent a bridge species between our Homo genus and its Australopithecus ancestor.

Berger thinks Karabo and an adult female found nearby represent a new hominid species, Australopithecus sediba, that may have been the first to walk upright the way modern humans do. A. sediba had long, apelike arms; a braincase one-third the size of a modern human’s; and a modern-looking pelvis that suggests it was a better upright walker than previous australopithecines.

Others contend the two are not human ancestors at all because they appeared around 400,000 years after the first evidence of H. habilis, the earliest in the Homo line. “Sediba is too late to sit on the lineage,” says paleoanthropologist Tim White of the University of California, Berkeley. Berger counters that the only fossils that can be definitively classified as H. habilis showed up after A. sediba. “Australopithecus sediba is the best candidate for a transitional species,” he argues. “It’s more advanced than Homo habilis, which appears later. It probably means Homo habilis is not really an ancestor of anything.”