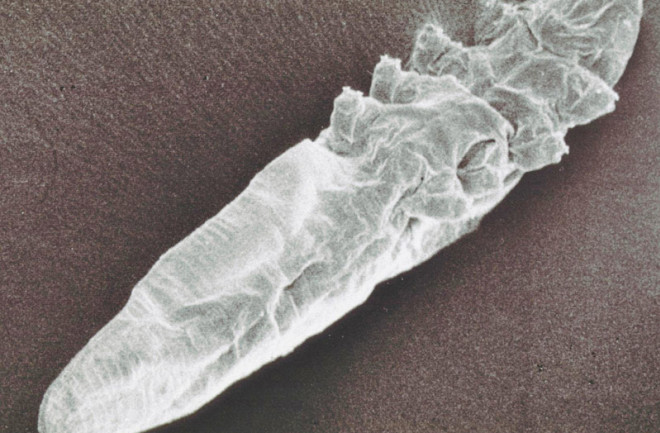 You are not alone. Your body is a collection of microbes, fungi, viruses … and even other animals. In fact, you aren’t even the only animal using your face. Right now, in the general vicinity of your nose, there are at least two species of microscopic mites living in your pores. You would expect scientists to know quite a lot about these animals (given that we share our faces with them), but we don’t.

Here is what we do know: Demodex mites are microscopic arachnids (relatives of spiders and ticks) that live in and on the skin of mammals — including humans. They have been found on every mammal species where we’ve looked for them, except the platypus and their odd egg-laying relatives.

Often mammals appear to host more than one species, with some poor field mouse housing four mite species on its face alone. Generally, these mites live out a benign coexistence with their hosts. But if that fine balance is disrupted, they are known to cause mange amongst our furry friends, and skin ailments like rosacea and blepharitis in humans. Most of us are simply content — if unaware — carriers of these spindly, eight-legged pore-dwellers.

Scientists from NC State, the North Carolina Museum of Natural Sciences, and the California Academy of Sciences have just published a study that uncovers some previously unknown truths regarding these little-known mites — all the while providing a glimpse into even bigger mysteries that have yet to be solved.

One of our most exciting discoveries is that these mites are living on everyone. Yes everyone (even you). This hasn’t always been obvious because it can be hard to find a microscopic mite living on one’s face. Traditional sampling methods (including scraping or pulling a piece of tape off your face) only return mites on 10-25 percent of adults. The fact that mites are found at a much higher rate on cadavers (likely because the dead are easier to sample more extensively and intrusively) was a hint that they might be much more ubiquitous.

As it turns out, you don’t have to actually see a mite to detect its presence. Dan Fergus, a mite molecular biologist at the North Carolina Museum of Natural Sciences, discovered that mite DNA could be sequenced from face scrapings regardless of whether a mite could be found under the microscope. And mite DNA was sequenced from every adult we sampled. Meaning that if you let us scrape your face, we’d find mite DNA on you as well. And where mite DNA is found, you’ll find mites.

2. Humans host two mite species that aren’t even closely related to each other.

One of the most intriguing (and unsolved) face mite mysteries is how humans acquired these beasties. Perhaps these mites are a model system of co-evolution. It’s possible that as every species of mammal evolved, so did their mites — each one particularly adapted to its changed environs. In such a case, we would expect that we acquired our mites from our ape ancestors, and that the two species of human mites would be more closely related to each other than to any other mite species.

However, we’ve learned that the two mite species on our faces, Demodex folliculorum (the long skinny one) and Demodex brevis (the short, chubby one), are actually not very close relatives to each other at all. Our analyses actually show that brevis is more closely related to dog mites than to folliculorum, the other human mite. This is interesting because it shows us that humans have acquired each of these mite species in different ways, and that there are two separate histories of how each of these mite species came to be on our face.

Though we don’t have enough evidence to say that we got one of our mites from man’s best friend, it does seem possible that one of the domestic animal species that we’ve long shared our lives with (be it dogs, goats or otherwise) may have gifted us their mites.

3. Mites can tell us about the historical divergence of human populations.

How we acquired our mites is just one part of the story. We are also curious about how our mite species have evolved since they became our constant companions.

Demodex have likely been living with us for a long, long time; as early humans walked out of Africa and found their way around the globe, they probably carried their mites with them. So we want to know if Demodex DNA can provide a reflection of our own evolutionary history by allowing us to retrace those ancient paths of human migration.

So far, our analyses look promising. When looking at the DNA from one of our mite species, D. brevis, we found that mites from China are genetically distinct from mites from the Americas. East Asians and European populations diverged over 40,000 years ago and so far it looks like their mites did as well.

On the other hand, D. folliculorum from China is indistinguishable from that of the Americas. Of the two Demodex species associated with humans, D. brevis lives deeper in your pores than folliculorum and is probably shared between people less readily, whereas D. folliculorum appears to enjoy global domination.

But as exciting as these results are, China and the U.S. are just a small piece of the picture. We can’t wait to see what happens when we sample D. brevis from people all over the world! The ancient journey of Homo sapiens as retold by mites.

If reading this made your face a little itchy, rest easy. In an evolutionary perspective, humans and Demodex are old, old friends. You are in good company. And so are your mites.