20 Things You Didn't Know About Moles 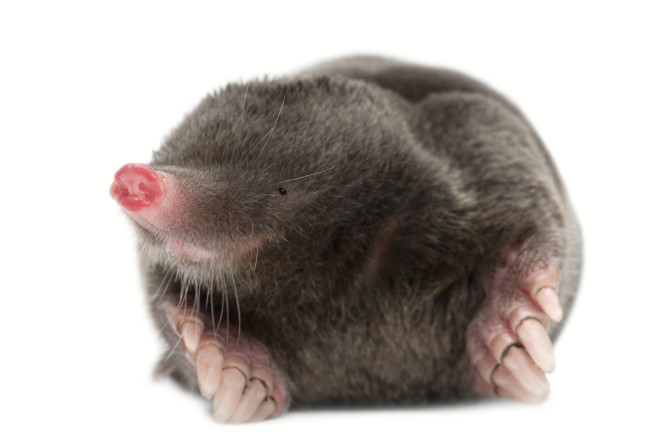 The range of the European mole, Talpa europaea, stretches from Scotland to Russia. (Credit: Eric Isselee/Shutterstock)

1. With forelimbs like clawed shovels, little or no eyesight and a penchant for tunneling, the much-maligned mole is considered a monster by many a gardener. But dig into the details of these fossorial, or burrowing, mammals, and you might envy their superpowers.

2. Take the star-nosed mole. Found throughout the northeastern U.S. and Canada, the semi-aquatic Condylura cristata has 22 symmetrical, tentacle-like appendages that sprout from its snout.

3. The wiggly, fleshy nose-fingers, or rays, have nothing to do with smell. They’re covered with 25,000 sensory receptors called Eimer’s organs that give the star-nosed mole a supersized sense of touch.

4. C. cristata can identify, capture and eat its prey, generally insects and worms, in an average of about 230 milliseconds. That’s roughly three times faster than a human driver’s reaction time to a red light.

5. Move over, cheetahs: This lightning-fast detection-to-ingestion, called handling time, earned the star-nosed mole the Guinness World Records title of fastest mammalian eater. Not bad for an animal that resembles a baked potato.

The star-nosed mole has 22 tentacle-like rays on its snout that provide it with an exceptional sense of touch. (Credit: Rod Planck/science source images)

6. While the star-nosed mole is impressive, don’t underestimate the 20-plus other burrowing mole species, which are spread across the Northern Hemisphere.

7. North America’s Eastern mole, for example, has evolved a unique way to survive underground, an environment with decreased oxygen and elevated carbon dioxide.

8. Other mammals (including most moles) living in these conditions typically have what’s called a high affinity for oxygen. That means oxygen binds super-efficiently to proteins in red blood cells that then deliver the crucial element throughout their bodies.

9. However, Eastern moles have a lower affinity for oxygen. Instead, they get by because their blood proteins release oxygen more easily to muscles and other tissues. Their blood also may bind more efficiently to carbon dioxide, helping rid the mole’s system of the excess gas as it moves around down under.

10. A different kind of down under: You probably can’t tell the sex of most moles just by looking at their genitalia. The females of several species have genitals that appear similar to those of males, while for males of some species, the penis is an internal organ.

11. Yes, it can be confusing. So are the number of animals called moles that aren’t moles at all. Mole rats are members of several different rodent lineages spread across Africa and Eurasia, named for their subterranean, molelike lifestyle.

12. Separated from rodents by nearly 100 million years of evolution, moles belong to the family Talpidae. Their closest living relatives include hedgehogs and shrews.

13. Meanwhile, the Mexican mole lizard is neither mole nor lizard. It’s an amphisbaenian, a small group of reptiles also known as worm lizards and often mistaken for snakes.

15. If you want to nix blisters, you might try moleskin. The fabric gets its name from mimicking the burrowing mammal’s velvety pelt. The fur has no nap, or direction of growth, to avoid rubbing the wrong way as the animal moves through tight underground tunnels.

16. Another mole-inspired invention: the color taupe. The classic neutral shade’s name is the French word for mole. The English term for the animal may have descended from mulda, the proto-Germanic word for “loose earth.”

17. The Latin word moles gave us a structural mole: a large breakwater or pier made from piled earth or masonry. The oldest example of this kind of mole, at Wadi al-Jarf, is more than 4,500 years old and dates to Egypt’s Old Kingdom period.

An architectural mole, or breakwater, protects a harbor on the Baltic Sea. (Credit: rdonar/Shutterstock)

18. Non-animal moles aren’t always massive. Sometimes they’re minute. The mole is one of seven base units in the International System of Units (SI), the world’s most common measurement system.

19. Redefined in May using a more precise mathematical formula, the SI mole is widely used in chemistry to calculate and express the mass of particles and molecules.

20. Holy moley, a mole is so much more than a scapegoat for your lousy lawn. (By the way, that expression has nothing to do with the burrowing animals, either. It’s a 19th-century euphemism for the exclamation “holy Moses.”)