20 Things You Didn't Know About ... Earthquakes

Even though technology has helped measure strength and flag strike zones, earthquakes still have a few mysteries that rattle experts. 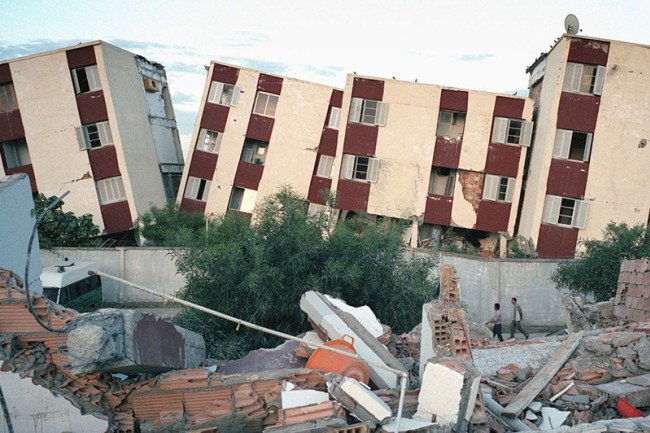 The 2003 Boumerdes quake in Algeria was the result of shifting tectonic plates. (Credit: Eric Bouvet/Gamma-Rapho via Getty Images)

1. Our planet is full of famous shaky spots — California, Japan, New Zealand and so on — but the father of modern seismology hailed from comparatively stable Ireland.

2. In 1849, Dublin-born engineer Robert Mallet detonated kegs of gunpowder he’d buried on a beach to test how shock waves traveled through rock and other material: the world’s first seismological experiment.

3. We’ve also got Mallet to thank for the very word seismology. He coined the term from the Greek seismos, or earthquake.

4. Mallet wasn’t the first to study tremors, though. Back in the fourth century B.C., for example, Aristotle theorized that surface shakes were caused by winds whooshing through underground spaces.

5. In the second century A.D., China’s Zhang Heng created the first seismoscope, which reportedly picked up a jolt not noticed by humans.

6. A massive quake near Lisbon, Portugal, in 1755 was felt as far away as Finland. It inspired the first proposal that waves of energy traveled from a single point of origin through rock, much the way sound waves travel through air.

7. It wasn’t until the early 20th century, though, that researchers understood seismic waves, which we now categorize as either body (moving through the planet’s interior) or surface.

8. The body wave known as a P wave, sometimes called a primary or compressional wave, travels faster than any other and is the first wave detected during an event.

9. You know what else picks up P waves? Pooches. Dogs can hear the waves, which have too high a frequency for our ears to notice. That’s why there are so many reports of dogs barking immediately before a quake.

10. P waves compress and move particles in the same direction that the energy is traveling — imagine the in and out of an accordion in action.

11. But slower, secondary S waves, the other type of body wave, move particles perpendicular to the direction the wave itself is traveling: up and down or side to side.

12. Surface waves, which travel only at or near Earth’s surface, actually cause the most damage. These waves move slower than body waves but don’t lose their oomph as they travel.

13. While seismic waves are now well understood, science still can’t explain earthquake lights (EQL), multicolored flashes in the sky typically reported before or during many large tremors. EQL sightings date back to at least the fourth century B.C.

14. A 2014 study in Seismological Research Letters suggested that EQL may be the result of positive charges building up along the fault line as stress increases before the big shake.

15. Large earthquakes happen mostly along faults where tectonic plates meet as they move over the planet’s surface. But plenty of smaller earthquakes, most not even felt by humans, occur across the world every day due to detonations, such as nuclear weapons testing or mining, or rising magma linked to volcanic activity.

16. Magma on its way to the surface can fracture crust or expand existing fissures; it’s a process similar to the way wastewater pumped underground during oil and gas extraction operations can cause small-scale seismic events.

17. Non-tectonic temblors are usually magnitude 3 or less on the Richter scale, the famous but now antiquated way to measure a quake’s shake. The Gutenberg-Richter law, however, remains fundamental to both seismology and geophysics. Simply put, the law states that within a region, the bigger the quake, the less likely its occurrence.

18. In January, Scientific Reports published an update to the law, which researchers believe more accurately models risk for catastrophic quakes.

19. And it’s good timing: The planet appears to be experiencing an uptick in high-magnitude quakes. From 1977 to 1999, the world experienced zero seismic events that were magnitude (m) 8.5 or higher. Since 2004, however, we’ve had six big shakes of m8.5 or more.

20. But our fussy planet does go through dips and peaks in seismic activity. From 1950 to 1965, for example, no fewer than seven quakes of m8.5 or more jolted Earth. So don’t retreat to your bunker just yet.