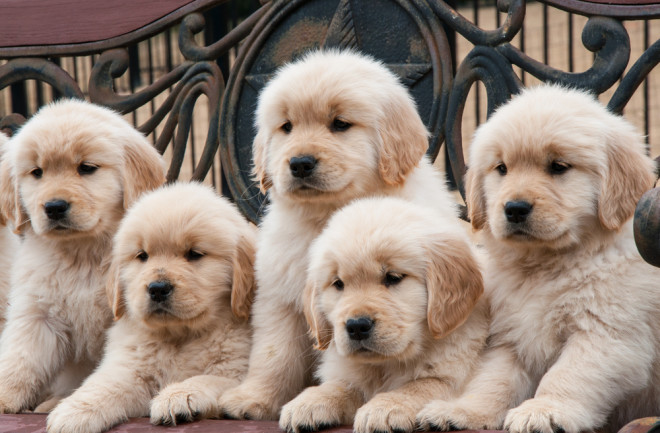 1 The sultry “dog days of summer” get their name from ancient astronomers who noticed that those days coincide with the period when Sirius, the Dog Star, rises at the same time as the sun.

2 Bad astronomy: Sirius is the brightest star in the sky, but it is just one 10-billionth as bright as the sun and has no effect on our weather.

3 Nerd. Fido will touch his nose to a computer screen if it has a picture of a dog on it but not if it shows a landscape, University of Vienna researchers have found.

4 Austrian scientists have also demonstrated that a dog seems to feel “inequity aversion” when another dog gets a better treat as a reward. The envious dog plays hard to get.

5 South Korean scientists cloned four beagle puppies with a gene that produces a fluorescent protein that glows red under ultraviolet light. (The red color is visible in the pups’ bellies and nails even under normal light, but it doesn't glow.)

6 Maybe they should have offered a Day-Glo option. BioArts, a California company, recently closed its dog-cloning business. One reason: The market was too small.

7 Another problem: “unpredictable results,” according to BioArts. In one case, the clone of a black-and-white dog came out looking greenish yellow.

8 The number of dogs worldwide is estimated at 400 million, roughly the human population of the United States and Mexico combined.

9 They really do look like their owners. In a study conducted at England’s Bath Spa University, people matching photos of dog owners and dogs chose the right breed (out of three) more than half the time.

10 Half of all owners allow their dogs to lick them on the face, but only 10 percent share E. coli strains with their pets. The real factor in germ transmission may be whether an owner washes his hands after playing fetch.

11 Fighting a hangover by drinking “the hair of the dog that bit you” may have originated in an ancient belief that ingesting the hair of a dog that literally bit you could guard against infection.

12 A 2006 study showed that household dogs with minimal training can smell early- and late-stage lung and breast cancers. Swedish oncologists also found that dogs can distinguish among types of ovarian cancer.

13 A dog’s nose has roughly 220 million olfactory receptors, 40 times as many as humans have.

14 Penn State engineers are trying to design an artificial sniffer based on the fluid mechanics and odorant transport of the canine nose.

16 A team led by UCLA biologists concluded that small dogs descended from Middle Eastern gray wolves more than 12,000 years ago. The connection was traced through a growth-factor gene mutation not seen in larger dogs.

17 Much older canid remains have been found in Germany, Russia, and Belgium, dating as far back as 31,000 years.

18 The reference genome for doggie DNA studies is the boxer, a breed that has an unusually high degree of genetic uniformity.

19 So that’s why schnauzers look like Groucho. According to scientists at the National Human Genome Research Institute, an alteration in one gene, RSPO2, gives dogs wiry eyebrows and mustaches.

20 A variant of another gene, FGF5, produces long, silky coats, and curly hair comes from a mutation in KRT71. All three variants produce a coat like that of the Portuguese water dog adopted by the First Family.