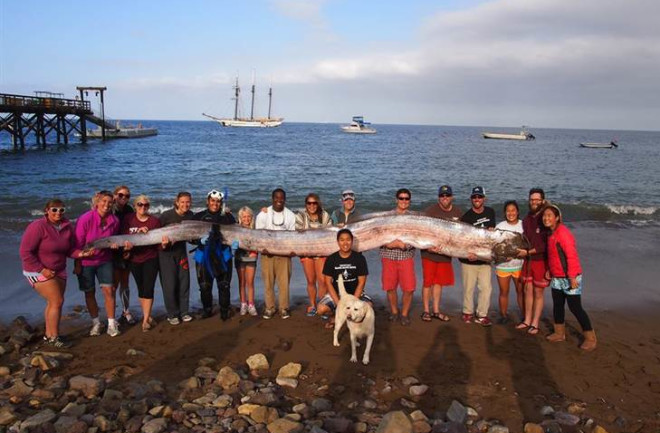 The oarfish held by the CIMI staff who pulled it out of the water. Credit: CIMI Jasmine Santana’s weekend snorkel outing off the coast of California turned from terrifying to titillating when she realized not only that the 18-foot-long sea monster she’d stumbled upon was dead, but also that it was a very rare oarfish. The Catalina Island Marine Institute, where Santana works as a science teacher, shared her excitement at the discovery of the giant oarfish, a mysterious, deep-sea dweller seldom seen near the coast. The huge creature is believed to have inspired tales of sea-serpents centuries ago.

A face only a mother could love. Credit: Associated Press video screenshot Santana was paddling around in shallow water, about 15 to 20 feet deep, when she came upon the enormous fish. She got over her initial shock, realized what it was and, with the aid of being underwater, pulled it from the ocean floor to the surface. She then enlisted the help of more than a dozen CIMI staff to haul the nearly 400-pound creature onto the Catalina Island beach. There, scientists and spectators marveled at the monstrous eel-like fish. At 18 feet long, it’s one of the biggest ever reported. (Navy SEALs found a washed-up 23-footer in 1996.) According to the National Oceanic and Atmospheric Administration, oarfish can grow up to 50 feet, though verified findings have been only about half that size.

According to the CIMI, this oarfish appeared to have died naturally. Researchers didn't know why the reclusive animal turned up so close to Catalina Island, only about 22 miles southwest of Los Angeles – perhaps it was lost or looking for food, or perhaps its already-deceased body was carried inland by the ocean’s current. One CIMI researcher called the oarfish the “discovery of a lifetime,” according to local TV station KTLA. The oarfish is presently on ice, and samples of its tissue will be sent to marine biologists for tests. CIMI plans to bury the carcass in the sand, so that animals can eat away its flesh and leave only the skeleton, which the institute hopes to preserve and display for educational purposes.