You've Seen This Letter Everywhere, But Can You Write It?

It's a lowercase letter 'g' with what's called a looptail. And it's mind-boggling. 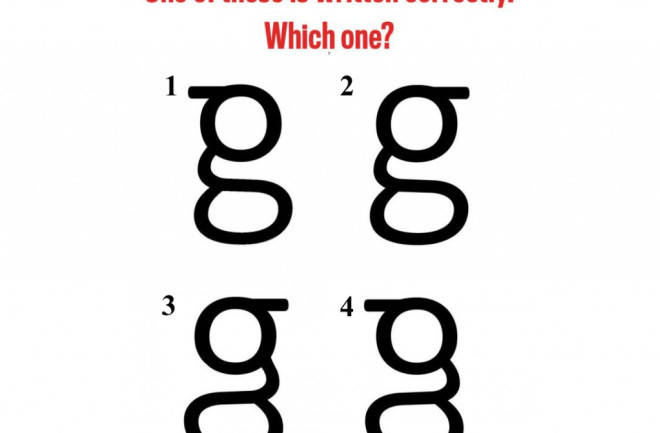 Which one is correct? (Credit: Johns Hopkins University)

Most of us learn the ABCs in our youth. We see and say the letters so many times they eventually become etched in our minds.

But researchers from Johns Hopkins University discovered that many people don’t know what the most common lowercase print version of the seventh letter of the alphabet really is. Heck, some didn’t even know there were two types.

Can You Guess the Correct Version?

There are two ways people write the lowercase letter G. The looptail, which we tend to read because it’s used in easy-to-read fonts like Times New Roman, Cambria and Calibri, and in most printed and typed material. The second is the opentail, which is the one we tend to write.

Go back to the top photo: Can you determine the correct looptail?

If you’re like me, you stared at the picture for quite some time and decided in a way they all look weird. But the second one, labeled 2, is correct. Props to those who answered without Google or scrollin’ the article for the answer. In the study, less than a third of 25 participants chose correctly.

Researchers also asked 38 adults to name letters that have two lowercase print forms. Two said G, while just one could write it correctly. Another 16 people had to read text, say the words that included the looptails aloud and then write the G they saw. Half wrote the opentail, while the rest tried to write the looptail — all but one failed to do so.

“They don’t entirely know what this letter looks like, even though they can read it,” said co-author Gali Ellenblum in a news release. She points out that this isn’t the case for most other letters.

The team also studied the two lowercase print versions of the letter A. But most people wrote the correct type and everyone selected the accurate shape. Some didn’t know there were lowercase versions of A, but it was less frequent than with G.

So even if we look at a shape a lot, like as we read, we might not actually learn the shape. Michael McCloskey, senior author of the study, said he and his team think we learn the shapes of most letters in part because we have to write them in school. While the looptail version isn’t instructed so we might not remember the shape as well.

The study was released Tuesday in the Journal of Experimental Psychology: Human Perception & Performance.

Editor’s note: I tried really hard not to use the lowercase version of the letter in question because Discover’s font shows the answer. Did you answer correctly or incorrectly all on your own? Did you scroll the article to find the answer? Let me know in the comments below.

Editor's Note: A previous version of this story said “sixth” letter, it has been updated to say “seventh.”