You're having fun when time flies

They say that time flies when you're having fun but it also works the other way round. If you make people think that time is passing more quickly, you can make tasks more fun, noises less irritating and good songs even better. 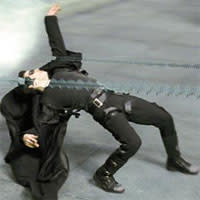 I'M NOT HAVING FUN!It's clear that our perception of the passage of time depends on how we spend it. When we're motivated, engaged or alert, it shoots by and when there's nothing to occupy our minds, it slows to a crawl. This was demonstrated most evocatively by a French geologist called Michel Siffre, who spent 2 months in a cave, completely isolated from human contact, clocks or daylight. He emerged after 59 days but thought that he had spent just 25.

We're so familiar with this effect that it can lead to faulty causal deductions. When our sense of time is distorted, we look for an explanation. And the most obvious one is that we're doing something that's either more or less fun.

Aaron Sackett form the University of Chicago demonstrated this through a series of clever experiments. First, he led 37 students into a room, deprived them of clocks and phones, started a stopwatch and asked them to underline specific words in a text. They were told they had 10 minutes, but Sackett told them their time was up after either 5 or 20 minutes. Alternatively, he came back after 10 minutes and said that 5 or 20 minutes had passed.

In both cases, preset stopwatches sealed the illusion. And in both studies, students who thought that time had flown by rated the test as more enjoyable, challenging, engaging and fun than those who were fooled into thinking that time had dragged.

As they listened, they watched a timer on a screen. If the timer was 20% faster than real time, the volunteers were less irritated by the printer sounds than those whose timers were 20% too slow. They were also less willing to switch from the printing cacophony to a different brand of irritating noise - the buzz of an electric drill.

Sackett thinks that people attribute distorted feelings of time to changes in enjoyment. In other words, we think that time flies when you're having fun, so changes in the flight of time must relate to how much fun we're having. The alternative idea is that the speedy march of time is actually pleasant in its own right. Sackett distinguished between these explanations by showing that the illusion only works if people are surprised by how much time has passed and if they actually believe that time flies when you're having fun.

Sackett explains that the timer only surprises the students when it counts up. In this scenario, the recruits didn't know how long the song was going to be, and the final count contradicted their expectations. When the timer counted down, they knew the song's alleged length right from the start, and expected the arrival of the 0:00 endpoint. This suggests that a faster tempo isn't inherently pleasing - it only shifts our sense of enjoyment when it is distorted enough to surprise us.

Sackett also asked 109 students to solve as many anagrams as possible in 5 or 10 minutes, but in reality, all of them had 7.5 minutes. The effect was expected but it was strongest in students who most strongly believed that time flies when you're having fun. In another study, Sackett actually manipulated their belief by showing them a science news story that either supported or refuted the "time flies" theory. When they did the word task from the previous study, the link between time and enjoyment was stronger among students who read the supportive article and non-existent among those who read the refutation. Some of the students guessed the purpose of the experiment, but removing them from the mix didn't change the results.

Finally, 60 students did the same word exercise from the first study but in this experiment, they were given an alternative explanation for the passage of time. They all wore foam earplugs to reduce distraction. Half of them filled in a survey with leading questions designed to suggest that earplugs can make time fly or drag. This alternative explanation killed the link between time and enjoyment.

Together, these studies strongly support Sackett's claim - our sense of how quickly time is flowing both affects and depends on how much we're enjoying ourselves. They also suggest that we could actively make our experiences more enjoyable by making it seem that time passes by faster. Sackett says that there are many ways of doing this, from simple things like swigging caffeinated drinks and rigorous exercise, to more unusual strategies like playing background music that doesn't fit the context (like Chinese music in an English restaurant).

These myriad tactics can change the perception of time - all you need to do then is to provide a "surprise moment" as Sackett did in his study. "To do this, you'd need to either distract people from actual time (i.e. from clocks) or else remove clocks altogether," he says. "Retail stores and casinos already do this well. Gyms, on the other hand, tend to have clocks everywhere. Then, after a while, allow them to make a clear comparison between how much time they thought had passed and how much time actually passed." For a shop-owner, the simple act of providing customers with free coffee and removing clocks from the walls could make a big difference to how enjoyable they'll remember their visit.

Sackett does have one caveat though. "Because I know why time is flying (and it's not because working out is fun), the effects of these strategies shouldn't work as strongly for me as it would for someone who hasn't read my research! Sometimes ignorance is bliss."