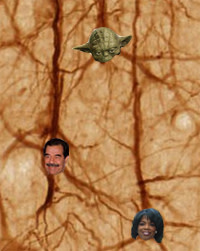 Four years ago, Rodrigo Quian Quiroga from Leicester University showed that single neurons in the brain react selectively to the faces of specific people, including celebrities like Halle Berry, Jennifer Aniston and Bill Clinton. Now, he's back, describing single neurons that respond selectively to the concept of Saddam Hussein or Oprah Winfrey. This time, Quiroga has found that these neurons work across different senses, firing to images of Oprah or Saddam as well as their written and spoken names.

In one of his volunteers, Quiroga even found a neuron that selectively responded to photos of himself! Before the study began, he had never met the volunteers in the study, which shows that these representations form very quickly, at least within a day or so.

In his original experiments, Quiroga used electrodes to study the activity of individual neurons, in the brains of patients undergoing surgery for epilepsy. As the volunteers saw photos of celebrities, animals and other objects, some of their neurons seemed to be unusually selective. One responded to several different photos of Halle Berry (even when she was wearing a Catwoman mask), as well as a drawing of her, or her name in print. Other neurons responded in similarly specific ways to Jennifer Aniston or to landmarks like the Leaning Tower of Pisa.

The results were surprising, not least because they seemed to support the "grandmother cell theory", a paradox proposed by biologist Jerry Lettvin. As Jake Young (now at Neurotopia) beautifully explains, Lettvin was trying to argue against oversimplifying the way the brain stores information. Lettvin illustrated the pitfalls of doing so with a hypothetical neuron - the grandmother cell - that represents your grandmother and is only active when you think or see her. He ridiculed that if such cells existed, the brain would not only run out of neurons, but losing individual cells would be catastrophic (at least for your poor forgotten grandmother).

The grandmother cell concept was espoused by headlines like "One face, one neuron" from Scientific American, but these read too much in Quiroga's work. It certainly seemed like one particular neuron was responding to the concept of Halle Berry. But there was nothing in Quiroga's research to show that this cell was the only one to respond to Halle Berry, nor that Halle Berry was the only thing that activated the cell. As Jake Young wrote, "The purpose of the neuron is not to encode Halle Berry."

Instead, our brains encode objects through patterns of activity, distributed over a group of neurons, which allows our large but finite set of brain cells to cope with significantly more concepts. The solution to Lettvin's paradox is that the job of encoding specific objects falls not to single neurons, but to groups of them.

There is evidence for this in Quiroga's latest study. This time, he recorded the activities of over 750 neurons in the mid-temporal lobes of 7 people. Again, all the volunteers were undergoing surgery for epilepsy and the electrodes had been implanted to monitor their brain activity. Each person saw a range of different objects, represented by three different pictures as well as their names, both printed and read aloud.

In one person, Quiroga isolated a neuron that became a thousand times more active when Oprah Winfrey's face or name was presented. But to a lesser degree, the neuron also responded to the concept of Whoopi Goldberg, so for this individual at least, the concepts of the two women were encoded by overlapping sets of neurons. Another volunteer had a neuron that fired 300 times more strongly in response to Quiroga himself. Quiroga actually found five neurons that responded to one or more of the researchers, none of whom had met the patient before.

Clearly, a small group of neurons had learned to respond to the category of "UCLA scientists" within just a day. These results clearly illustrate the fallacy of the "grandmother cell", or indeed the "Halle Berry cell". The "Oprah neuron" isn't just dedicated to Oprah - it encodes Whoopi Goldberg too, albeit to a lesser degree. And the "UCLA researcher cell" is just part of an ensemble that represents UCLA researchers - hardly a case of "one face, one neuron".

Instead, our brains encode concepts in the activity of overlapping sets of specific neurons. It's an efficient system and ensures that our large but finite supply of brain cells can encode more concepts than a simple one-to-one ratio would allow. The fact that some neurons selectively responded to Quiroga's crew highlights another benefit of this "ensemble encoding" - it also allows a network to quickly build in new representations without "catastrophic interference" between new concepts and existing ones.

The study also confirms that while different parts of the brain are involved n processing images, voices or words, all of this information can converge on specific neurons. Brain-scanning techniques such as fMRI have suggested that some parts of the brain combine information from different senses, but these studies can't tell us whether this is down to neurons that collate information from across our senses or groups of neurons, each responding to a single sense. Quiroga's experiments, however, can.

He suggests that the neurons of the medial temporal lobe can represent abstract concepts by creating associations between disparate bits of information - such as a person's name and their face. It's not the first time that these neurons have been implicated in forming new mental association, and it's supported by the fact that some neurons were triggered by related things. One fired to both Yoda and Luke Skywalker, another fired to snakes and spiders, and yet another was activated by the Sydney Opera House, the World Trade Center, the White House and the Bahai Temple.

Quiroga imagines that some neurons in the network receive signals from parts of the brain involved in visual processing, others from areas involved in recognising speech. "Learning the name of a person could be achieved by linking the activity of these neurons," he explains, so that any one stimulus - be it their photo or the sound of their name - activates the whole network.