Your Brain Calls in Backup to Find Lost Things 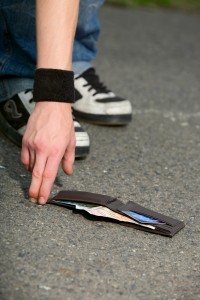 When you lose something important---a child, your wallet, the keys---your brain kicks into overdrive to find the missing object. But that's not just a matter of extra concentration. Researchers have found that in these intense search situations your brain actually rallies extra visual processing troops (and even some other non-visual parts of the brain) to get the job done. It has to do with the way your brain processes images in the first place. When you see objects, your brain sorts them into broad categories---about 1,000 of them. The various elements we perceive trigger a pattern of different categorical areas in our brains. For example, if you see a woman carrying an umbrella while walking her dog in the park, your brain might catalog it as "people," "tools" and "animals." But when you lose something, your brain reacts a little differently. It expands the category of the object you're looking for to include related categories and turns down the perception of other, non-related categories, to allow you to focus more intently on the object of interest. To see what this altered categorization looked like during a search, researchers at UC Berkeley used functional magnetic resonance imaging (fMRI) to record changes in five people's brain activity as they looked for objects in movies. The objects they sought were categorized broadly, paralleling how our brains separate items into generalized groups like "vehicles" and "people." During hour-long search sessions, the researchers found that regardless of whether the participants found the objects they were looking for, their brains cast a wider visual net than they would if they were watching passively. 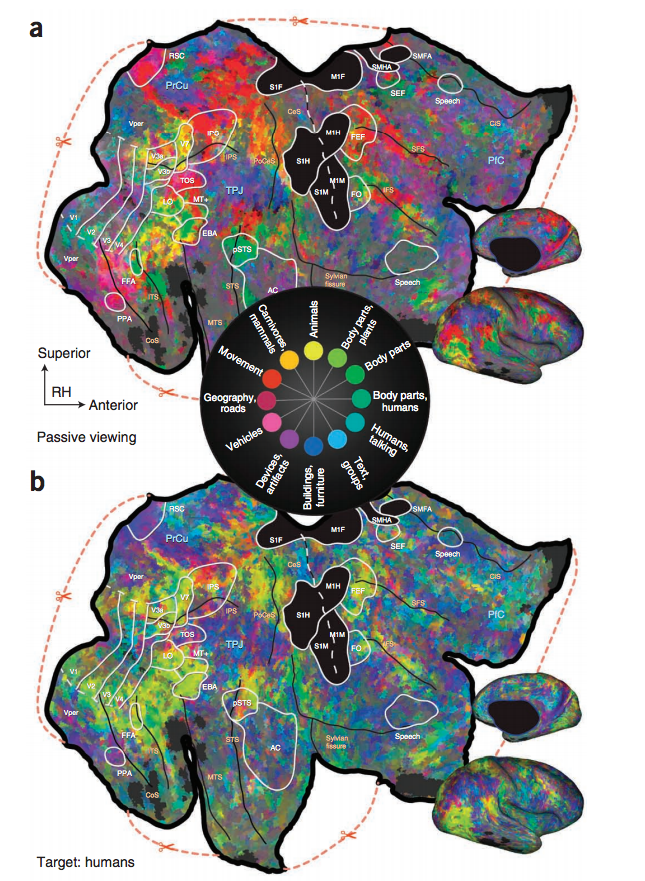 Showing the difference in participant's brain function during passive watching (top) and searching for people (bottom). Categories are shown in different colors. Image courtesy of Çukur et al., Nature Neuroscience. For example, when participants were asked to look for people, their brains also commandeered the brain regions responsible for perception of animals, body parts, action verbs and natural materials and shifted them toward the perception of people. Likewise, when participants were seeking vehicles, the categories of tools, devices and structures were also stimulated by representations of vehicles. And it wasn't just when cars or people were present. These expanded brain categories were seen even when the participants were looking for objects but not finding them. Even areas of the brain used for tasks like abstract thought were recruited for the searching process. And while these brain areas were working overtime, other, less-related categories showed less stimulation than normal. The researchers say their work demonstrates how dynamic our brains can be in response to particular demands. We can actually optimize our brains to process how we see things in order to focus on finding something, according to their results published in Nature Neuroscience on Sunday. Want to see their work in action? The researchers have an interactive online brain viewer that lets you explore various 3-D MRI scans from the study. So next time you misplace your wallet, don't curse your terrible memory. Be grateful that your brain is working overtime to try and find it. Top image courtesy of Couperfield/Shutterstock