You Got Genetic Engineered Fish in My Dish! 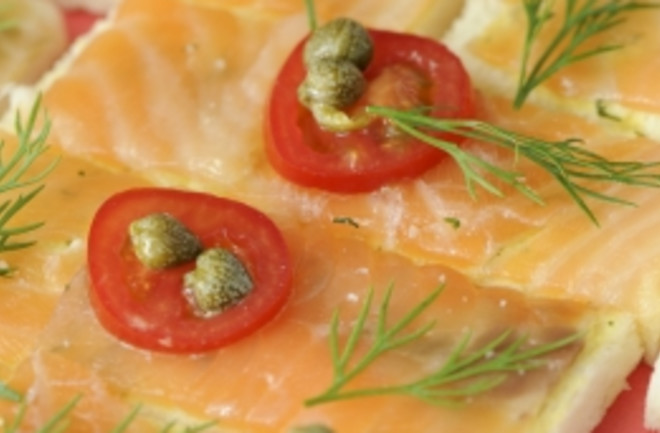 If the thought of digging into a fresh fillet of spliced salmon is enough to put a damper on your appetite, you may want to start paying closer attention to the labeling. The FDA is strongly considering approving the sale of genetically engineered salmon for general human consumption. An aye from the agency would likely herald a marked shift in how animals are raised and brought to our store shelves in the coming years, dramatically speeding up the growth process and enabling the production of countless “designer” meats. The company behind the super-salmon--Waltham, Massachusetts-based, AquaBounty Technologies--has been pleading its case with the federal government for years, asserting that the farming of “designer” salmon does not pose any significant health or environmental risks. AquaBounty’s product is a strain of Atlantic salmon equipped with a growth hormone gene from the Chinook salmon and an “on-switch” from a fish called the ocean pout which, when inserted into the appropriate slot in the fish's code, lets it grow year round by cranking out the hormone at a constant clip. As a result, the fish develop twice as fast as regular salmon (but don’t grow any larger), reaching their full stage of maturity in roughly a year and a half, while also consuming far fewer resources. If AquaBounty’s pitch to the FDA is successful, it would begin to sell the fertilized eggs to fish farms, rather than grow the salmon itself. To prevent the dreaded “Trojan gene” effect whereby genetically enhanced species trickle out into the wild and overtake their less endowed relatives by out-breeding and out-competing them, the fish would all be female, sterilized and held in large, self-contained tanks. It's also worth noting that transgenic fish are 20 years in the making, so we're not exactly talking about a brand-spanking new, untested technology. Sounds like that should pretty much take care of any lingering concerns about the salmon’s risks to the environment, right? Well, maybe so, but that’s only if you take the company at its word. Many watchdog groups have complained that the government’s review process has been veiled in secrecy and that AquaBounty’s data has not been made available for public scrutiny. Without more crucial information about its experiments and the properties of its unique gene construct, it is impossible to predict whether the company’s roll-out will be as smooth and problem-free as it claims. And, not to sound too paranoid, but what if a rogue AquaBounty employee decides to secretly breed the salmon, and one specimen happens to escape? Another point of contention is labeling. Currently, companies are not required to label genetically modified organisms, and that will likely remain the case with these animals in the short term. Since the government lacks the power to institute mandatory labeling, there have been talks of having the companies do it on a voluntary basis. Which means you can forget about seeing labels any time soon. What is probably most worrisome to these organizations is the prospect that another less vigilant company could accidentally release an altered specimen into the wild, allowing it to proliferate at the expense of the wild species thanks to its beneficial genes and, in the worst-case scenario, drive it towards extinction. Also, it would be one thing if these companies only tinkered with their chosen animal’s genes on a small scale--say increase the proportion of white meat or boost their muscle mass--but what if you get the odd scientist who decides to splice in genes from another species a la Splice? Now, granted, there is no reason to expect that this would happen if the underlying technologies remain in the hands of capable entities--after all, we have yet to see a half-alligator, half-corn plant and genetically modified crops have been with us for ages. Still, given the inherent complexity of tweaking an animal’s genome, it isn’t out of the realm of possibility that a perfectly innocent attempt to grant a species new properties, or, heck, create a hybrid species, could quickly go south with a few minor mistakes, as was put vividly on display in Splice. And, with the rapid pace of technology, we may get to the point within the next few decades when these seemingly surreal processes become old hat.