You Go, Girl—Female Students Who Bike or Walk Do Better on Tests 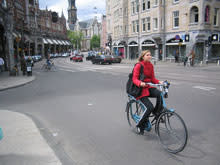 One more reason to dust off that bike: in a study of Spanish high schoolers, girls who biked to class scored better on school tests than those who commuted in a car or bus. About 65 percent of the teens participating in the study (1,700) said they rode a bike or walked to school. When the researchers looked at the girls' performance on tests of cognitive ability, they saw that active commuters averaged 53 points, about 4 points higher than girls who came by motor vehicle. And the longer their commute, the better the correlation, explains Reuters:

Girls whose active commute lasted longer than 15 minutes did better on the tests than girls who walked or biked for less than 15 minutes on their way to school---a sign the relationship between active commutes and test performance is real, [lead researcher Francois] Trudeau said. Indeed, the effect persisted even after the researchers accounted for age, body weight, social and economic status, and activities outside school.

Researchers think this might be because these active commuters are getting more exercise, though it is also possible that those who have active commutes are more alert by the time they start school, which could affect how well they learn when they do make it to school, the researchers told Reuters

Trudeau added that walking or biking to school often takes longer than a car or bus ride, which may provide time to reflect and mentally prepare for the day, giving them an edge. "It may be a good period to start thinking about the school day."

The authors also couldn't rule out the possibility that active commutes and higher test scores were not directly connected, but instead were linked by some other attribute---some personality trait that would both incline girls to bike and make them do better on tests. For some reason the correlation didn't hold up in boys. The researchers aren't sure why this is, but they have some ideas. It is possible that the extra bit of exercise isn't as important for boys, if boys are generally more active anyway. And the difference could be due to some brain difference between girls and boys, the authors suggest. Related content: Discoblog: Food Fraud: High Schoolers Use DNA Tests to Expose Fake Caviar

80beats: Wall Street’s Winners May Be Determined While They’re Still in the Womb

Not Exactly Rocket Science: Does national IQ depend on parasite infections? Er…