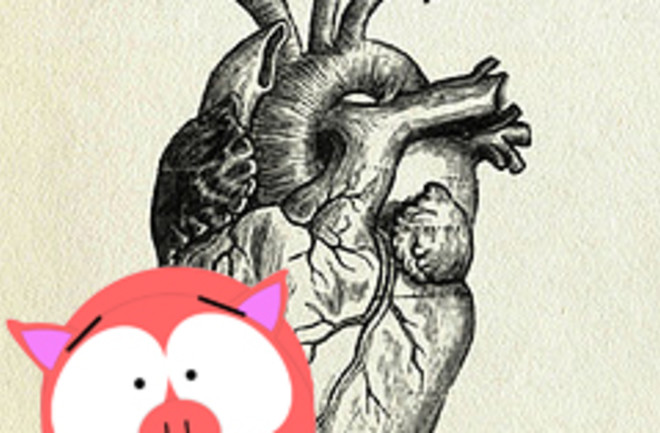 But probably not! You see, I was merely quoting Margaret Somerville, the Director of the Centre for Medicine, Ethics and Law at McGill University in Canada. In addition to thinking gay marriage is bad for the kids, Somerville really does not like transhumanists. She thinks that personhood is the "world's most dangerous idea," (sounds vaguelyfamiliar) because if aliens, animals and robots have rights too, we won't value humans anymore. In her recent piece, calmly titled "Scary Science Could Cause Human Extinction" Somerville makes a strange argument about xenotransplants (i.e. organ transplants). First, she beats up on transhumanists and our support of life-extension. She attempts to link life-extention with genetically modified animal organ transplants. She then argues that the transplants will, get this, cause a mutant virus leading to a global pandemic obliterating humanity. I am not joking:

[Using genetically modified pig-hybrid organs] poses a risk, not only to transplant recipients, their sexual partners, and their families, but also, possibly, to the public as a whole. An animal virus or other infective agent could be transferred to humans, with potentially tragic results – not just for the person who received the organ but for other people, who could subsequently be infected. And there might be a very remote possibility that it could wipe out the human race.

Somerville's argument abuses the word "potentially" and its synonyms in a desperate attempt to draw a link in the reader's mind between xenotransplants and a cataclysmic plague. Human-to-human disease transmission during transplants is extremely low, and the genetic differences between humans and animals, even hybrids, would lower the risk all the more. Martine Rothblatt, (a Fellow at the Institute for Ethics and Emerging Technologies) wrote a whole book, Your Life or Mine, addressing the fears around xenotransplantaion. In short, Somerville's concerns about xenotransplantation are not based in science, but in bioLuddite hysteria. Somerville's case against xenotransplantation is in terminal condition already, and things only get worse from here. I would summarize the rest of her argument if it wasn't, well, so incoherent. For example, Somerville is confused about anti-aging research. She seems to think that researchers are simply trying to slow down human maturation, "so that we would reach puberty around 40 years of age, early middle age at 80." Um, no. The goal is not to slow the maturation process but to inhibit and potentially reverse the damage that accrues at the cellular level over time due to aging. Aubrey de Grey describes his anti-aging research as Strategies for Engineered Negligible Senescence, not Strategies for Twenty Years of Puberty (by Einstein's mustache, that's a dystopia if I've ever heard one). Humans would mature normally, we just wouldn't age as rapidly once mature. Somerville's misunderstanding on the anti-aging point is indicative her perspective throughout the article. How Somerville gets from reversing cellular damage to pig-hybrid xenotransplants as a way to slow aging I'm not sure. I've never encountered an argument for life-extension based on total organ replacement, save perhaps Outnumbering the Dead. As Somerville's article has no citations, so it's hard to know where she's getting her information. I imagine her thought process around life-extension and xenotransplants was something like this: Transhumanists probably support both of those things, why make logical connections when you've got a movement to smear, am I right? But let's say we grant Somerville all of her erroneous points, and agree that xenotransplants from animals is a terrible, dangerous idea that will cause global catastrophy. Guess what, it doesn't matter. Pig-as-organ-farm idea went out of vogue right about when we realized we could, uh, forget the pig. MIT researchers are beginning to figure out how to use a hydrogel scaffold to support and guide the growth of stem cells into new organs. If they get technique perfected, single stand-alone organs could be grown from your own cells – perfect matches made on demand. Or maybe we'll just build artificial organs, like kidneys and lungs, and make everyone into cyborgs. No worries of robot-to-human virus transmission. Feel better, Marge? Image from K Sandberg at Vintage Collective via Flickr