Words On The Brain: A Semantic Map of the Cortex

In a new Nature paper, Berkely neuroscientists Alexander G. Huth and colleagues present a 'semantic atlas' of the human brain. Huth et al. have mapped which brain areas respond to words, according to the semantics (meanings) of each word. It turns out that these maps are highly similar across individuals - which could have implications for 'mind reading' technology. Huth et al. recorded brain activity with fMRI while seven volunteers listened to over two hours of audio narrative (taken from the award winning 'Moth Radio Hour' series.) The purpose of this was to determine the pattern of neural responses associated with different words. In total, there were over 10,470 English words in the Moth narratives. To make it feasible to analyse these, Huth et al. first calculated the co-occurrence between each word and 985 common English words, which served as semantic 'markers'. For instance, a word which has a high co-occurrence with "worry" is likely to mean something related to anxiety. Finally, Huth et al. used principle component analysis (PCA) on the co-occurrence data to find a small number of factors or components. These components are high-level semantic domains. For instance, component 1 (PC1) indexes the 'humanness' of words, with high scores on PC1 for words related to categories related to humans and human society and emotions. PC2 seemed to capture the "sensoryness" of words, with concrete, sensory terms scoring high on PC2 while abstract, intangible words scored low. So where in the brain are these semantic categories encoded? The image below shows the data from one of the participants, S2. Neural activity in response to PC1 is shown in red, PC2 is green and PC3 is blue. 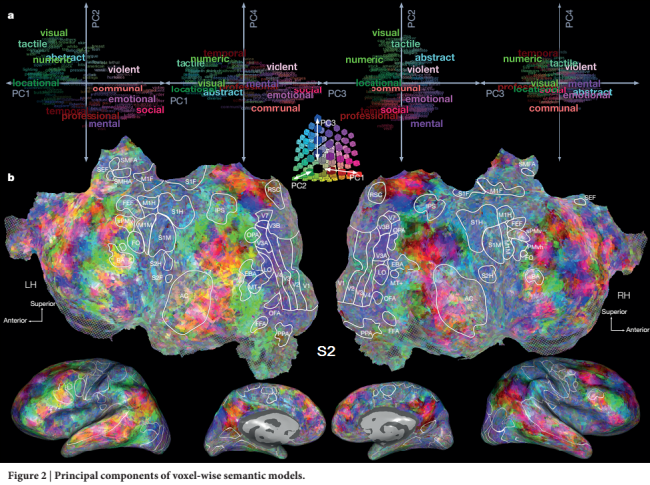 The patches in the centre of the image show the cerebral cortex unfolded into a flat sheet. This contains the same information as the more familar 3D brain images, seen at the bottom of the picture. The unfolded sheet is a less intuitive view, but it has the advantage of showing the whole cortex at once. So are these semantic maps unique to each individual? No - they seem to be largely shared across individuals. Here's the maps from three of the other participants (S1, S3 and S4). It's clear just from eyeballing this that, broadly speaking, these maps are very similar, suggesting that we might all have more or less the same semantic atlas: 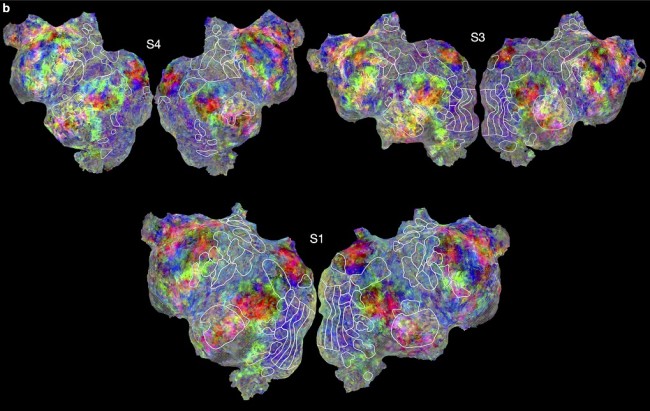 This is an extremely cool study. The results aren't especially surprising - plenty of previous studies have shown that semantic categories are associated with activity in particular brain areas. But Huth et al. used real-world stimuli to provide an unusually comprehensive approach to the issue. That said, it's important to remember that Huth et al. didn't map the brain responses to individual words. The semantic atlas deals with general word categories. This is relevant to the question of whether Huth et al.'s findings could be used to help "read minds". As far as I can see, while it might be possible to use Huth et al.'s method to determine whether someone is thinking about (say) 'child' or about 'yellow' - as these words/concepts fall into very different categories - it would prove much more difficult to distinguish 'blue' from 'yellow' or 'son' from 'daughter'. So Huth et al. might be able to read your brain and work out what kind of thoughts you are having, but probably wouldn't know what those thoughts were, specifically. In other words, I don't think this paper heralds the arrival of fMRI 'mind reading' - not yet, anyway.