A new paper in PNAS raises the interesting suggestion that our brain function goes through yearly cycles. According to authors Christelle Meyer and colleagues, their findings reveal new evidence of seasonal effects in human cognitive brain function "that could contribute to cognitive changes at specific times of year." However in my view, the study is too small to be conclusive. Meyer et al. used fMRI to scan 28 young participants. Each of the volunteers spent 4 1/2 days in a laboratory "devoid of seasonal cues", which included a period of sleep deprivation, before being scanned.

During the fMRI, participants performed two cognitive tasks, one measuring sustained attention, and another executive function. Meyer et al. examined whether the season in which the fMRI scan took place was correlated with brain activity during the tasks (this study took place over the course of 18 months, between May 2010 and October 2011.) It turns out that there were some significant correlations. Across several brain areas, neural activity followed a seasonal cycle. Here's the executive function task: 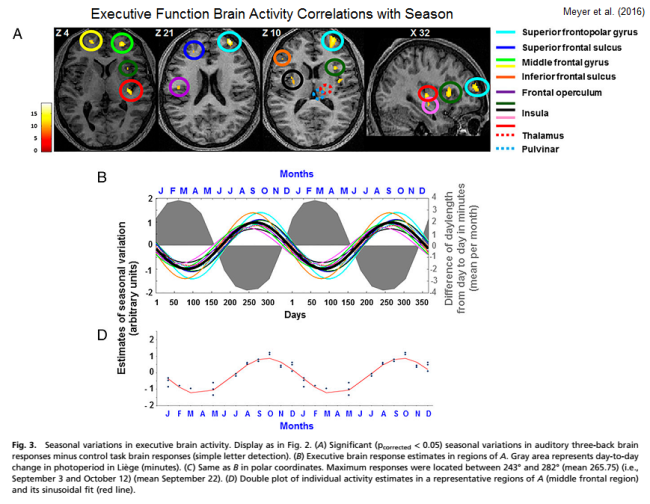 However, I'm a little skeptical. I'm not sure if the impressive sinusoidal cycles seen in parts B and D of the image above are an instance of the voodoo correlations effect, but my main concern is the sample size of just 28. That seems small for a between-subjects study intended to measure subtle correlations of this kind. Presumably the sample size was limited because an impressive five days of work went into testing each participant. It can't have been easy (or cheap) to keep each volunteer in the lab "under strictly controlled conditions, devoid of seasonal cues" for that long. These precautions which were meant to ensure that factors, associated with the seasons, such as the temperature and light level, were controlled for, to reveal the effects of the season per se. But I'd be more convinced if the authors had shown that seasonality effects were also (albeit perhaps weakly) present in a large sample of normal scans. For instance, last year, it was discovered that the size of the human brain changes over the course of each day. That study had a sample size n=9383, pooled from two large studies of MRI scans that took place at different times of day. Perhaps something similar could be tried in this case? Around the world, neuroscientists run fMRI scans in all seasons. Maybe it would be possible to pool together a database of fMRI scans, using the same task, to look to see whether the date of the scan had any effect. An alternative approach would be to scan a small number of participants multiple times each, spanning the course of the year. Such a within-subject design would increase the statistical power.