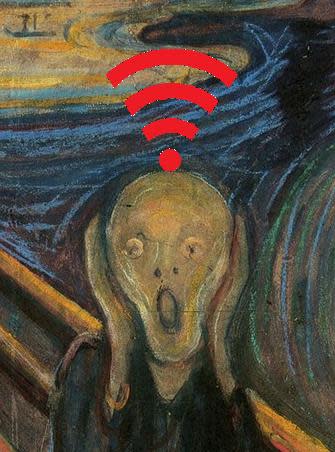 ...allegedly. It's not. But a lot of people think so. Driven by media and online coverage of the idea, many believe that things like wifi and cell-phone signals are making them ill. There's no good evidence that such 'electrosmog' causes health problems. From what we know of physics, it's most unlikely that these signals interact with biological systems at all - they're just not the kind of radiation that affects living cells. However, the symptoms are real enough - people are suffering. Psychologists Michael Witthöft and G. James Rubin investigated the effects of an alarmist TV program (this one) on 'wifi induced' symptoms: Are media warnings about the adverse health effects of modern life self-fulfilling? In this study, volunteers were randomized to either see the scary show, or else a neutral program on an unrelated topic, to act as a control condition. Everyone was then made to wear a fake 'wifi amplifier' attached to a headband, and told that they would be exposed to 15 minutes of high-powered signals. The idea was to maximize their expectation of feeling symptoms. In fact, it was all a sham, but half of the volunteers thought they'd suffered wifi symptoms, ranging from stomach pain, to headaches, and difficulty concentrating. Two of the participants even quit the study early, because they felt so unwell. The effects of the TV show on people's reactions were actually fairly modest. It increased wifi-induced symptoms in people with an anxious personality, but it actually decreased them in the less anxious folk, so it had no effect overall: 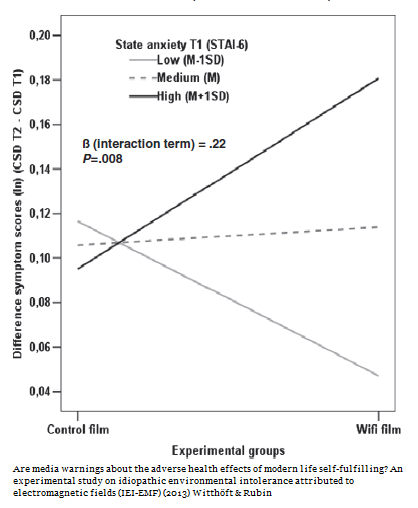 Many are skeptical of these kinds of 'subgroup-specific' results because they can be a sign that researchers didn't find the effect they expected and decided to try other statistical tests to get some kind of result. So that's a bit of a bust. However, Witthöft and Rubin's study still clearly shows that, just through the power of negative expectation - the nocebo effect - many ordinary people report feeling unwell due to fake wifi exposure. Over 50% of volunteers thought they'd been hit. And without media coverage of the 'wifi-syndrome' meme, very few people would ever have heard of this idea, and so there'd be no such expectations. So even if 15 minutes of dodgy TV doesn't have much effect, it's evident that the media, as a whole, does. Still, while these kinds of studies are very interesting, by themselves they can't prove that there isn't a real syndrome out there. This experiment show that symptoms associated with wifi exposure can be produced by expectancy alone. I'd say that's by far the most likely explanation for wifi 'sensitivity syndromes'... and all the others along the same lines: windfarm, 'sick building', etc. But it's still a possibility that someone, somewhere, is actually sensitive to these things. It's hard to prove a negative. To settle the issue of, let's say, windfarms, I'd like to run the following experiment. Get together a bunch of windfarm-syndrome sufferers, and put them on a bus with blacked-out windows. Then, on a nice windy day, someone drives them around the countryside. The route would take them past windfarms but also far away from them at other times. Without being able to see them, could they tell when they were near a turbine? As I see it, this study would be the only way of convincing the die-hards that there's no effect. It would be a pretty easy study, you could do it within a $1000 budget for a day's coach hire and refreshments. Also, it would be the wackiest road-trip since the Electric Kool-Aid Acid Test. For added fun, you could take along some of the media advocates of windfarm syndrome for some comic relief (they tend to be 'eccentrics', let's say.)