Wind Farms, Infrasound And The Brain

An alarming news story appeared on Monday in the Daily Telegraph:

What's curious about this is that the research in question wasn't about wind turbines, and has not been published anywhere yet, as far as I can tell. The source of the story is a press release from the Physikalisch-Technische Bundesanstalt (PTB) of Germany. The press release gives an overview of the research, which used fMRI and synthetic (not wind turbine) infrasound. It doesn't refer to any peer-reviewed journal papers or even to a presentation at a conference. I searched Google Scholar for publications by the lead researcher, Christian Koch (not to be confused with Christof Koch), on "infrasound". This revealed two conferencepapers but neither of them used fMRI. More on those later. The fMRI results do appear in a January 2015 newsletter produced by the research team involved, the EARS Project. This has a few more methodological details, including that there were 16 participants, but it also says (emphasis mine) that

The fMRI results indicate an involvement of auditory cortex in the processing of almost all the presented stimuli. No other brain regions were observable for the statistical threshold at p < 0.001 and a cluster size > 22 voxel.

So in January, the fMRI results showed auditory cortex activation only. I'm not sure where the press release's "reaction in certain parts of the brain which play a role in emotions" - or as the Telegraph misreport it, "danger response" - came from. 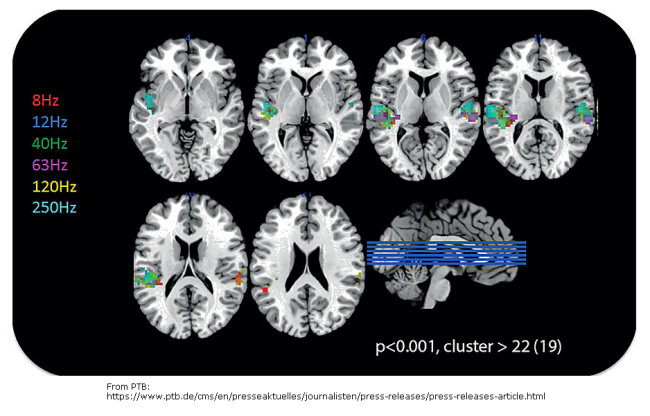 Of course, this newsletter was an informal update, not a scientific presentation. But this is precisely why the PTB press office shouldn't be sending out press releases yet. We will have to wait until the fMRI data are properly published before we know whether 8 Hz stimulation induces fMRI signal. One reason to wait is that these authors have previously measured auditory cortex responses to 8 Hz infrasound using a different brain scanning tool, magentoencephalography (MEG). The results were rather lukewarm: 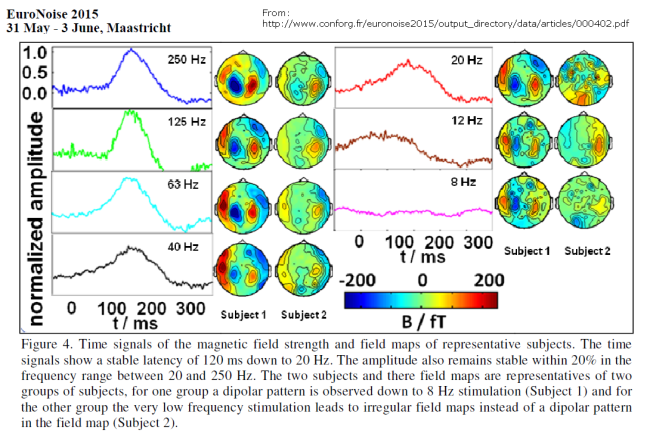 As you can see, sound of higher, audible, frequencies induces an auditory evoked response potential (ERP), peaking at around 120 milliseconds after the sound plays, localized over the auditory cortex. However, at 8 Hz (bottom right panel), I don't see any ERP. The response looks like a flatline to me. The authors refer to a subgroup of participants who do show a robust 8 Hz ERP, but no statistical details are provided. I'm not criticizing the authors or trying to 'get' them by pointing out 'inconsistencies'. As a researcher, I know that a lot can change between early presentations (e.g. internal communications, newsletters, conference abstracts) and the final analysis (published papers). That's how science works. Obsessing over such discrepencies makes you a conspiracy theorist, not a scientist. My point is simply that if research hasn't been definively published, then it's not finalized, and shouldn't be publicized. This is especially true when it comes to a controversial topic such as wind farms and renewable energy. Alarmist journalists and climate 'sceptic' blogs have already reported on - or copy-pasted - the press release with the implication that wind farms are harmful. Of course Koch and colleagues didn't say that. And I'm sure that the press officers at the PTB don't approve of how their release is being politicized. But the scientific illiteracy of the scaremongers in this area is a well-known fact. Also well known is the tendency for colorful brain images to attract attention. The alarmism, therefore, was predictable.